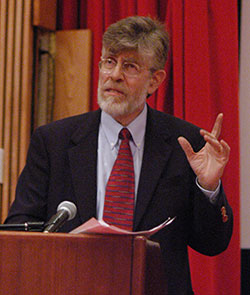 Alan Mayer Blum, M.D. is a founder of Doctors Ought to Care, and has served as a Plaintiff's Expert in cases against the tobacco industry.

Alan Mayer Blum attended Amherst College and graduated in 1969. He attended the Emory University School Of Medicine in Atlanta, Georgia and graduated in 1975. Dr. Blum has devoted his career to the prevention of tobacco-induced illness through science, marketing and education. While serving as editor of The Journal of the New York State Medical Society in the mid-1980s, Blum risked his job by publishing solid statistics that demonstrated the risks of smoking. In 1977, he founded Doctors Ought to Care (DOC), a health-promotion organization that teaches doctors how to help patients overcome their addiction to smoking. Former U.S. Surgeon General C. Everett Koop has called him an "unsung hero of the world of public health" for the fearless way in which he has long battled against the tobacco industry.

Dr. Blum wrote a letter to the New York Times regarding Eastman Kodak Company/Eastman Chemical Company's involvement with the tobacco industry.[1] Blum also wrote an article in the March, 1993 issue of Tobacco Control journal showing connections between health-related corporations and the tobacco industry.[2]

Dr. Blum is considered a world's expert on tobacco. He has a broad range of knowledge of the tobacco industry and especially of the advertising of the industry. He is the winner of the Surgeon General's Medal for Public Health. He has collected the majority of items in the DOC advertising and promotion archive. He is an expert in counter-advertising. DOC (Doctors Ought to Care) is located at 5615 Kirby Drive, Suite 440, Houston, Texas 77005.

This is a group of physicians, health care workers, teachers and others who work on diseases caused by advertising, particularly tobacco. The DOC archive is probably the single largest collection of tobacco advertising, paraphernalia, and documents in the world. DOC specializes in counter-advertising and education.[3] Dr. Blum served as associate professor of family medicine at Baylor College of Medicine, 5510 Greenbriar, Houston, Texas 77005.[4]