Alan Milburn is a former Labour Party (UK) MP for Darlington, in the north-east of Britain.

Alan Milburn returned to the Cabinet in September 2004, with his appointment as chancellor of the Duchy of Lancaster. The move, widely seen as a snub to Chancellor of the Exchequer Gordon Brown, placed Milburn in charge of Tony Blair's campaign for the May 2005 general election. [3]. The British press had often speculated that Milburn's relationship with Brown was strained.

Born 27 January 1958 in Birmingham, Mr Milburn was brought up by a single mother. He attended John Marlay School in Newcastle, and Stokesley comprehensive in Cleveland, and then went to Lancaster University to study history. [5]

Alan Milburn has a more radical past than his current incarnation as a neoliberal advocate of privatisation would suggest. According to BBC News Online, Milburn "worked in a Marxist bookshop called Days of Hope for £20 a week and was a CND activist. He ran the campaign to save Sunderland's shipyards and is a past president of the Union for Manufacturing, Science and Finance in the north east." [6]

Milburn was formerly married to Barbara (Mo) O'Toole. O'Toole was an MEP until she lost her seat in June 2004. In February 2005 she was reported to be considering attempting to get on the Labour candidate shortlist for the Bishop Auckland constituency at the forthcoming general election. [7] [8] 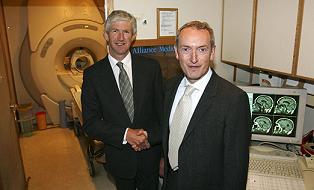 During his time outside the Cabinet, between 10 March and 8 September 2004, Milburn took on a £30,000 a year consultancy with the venture capital firm Bridgepoint Capital Ltd. [10] [11] His role proved controversial, since Bridgepoint part-owns Alliance Medical Ltd., a company which provides health scanning services to the NHS. In June 2004, Alliance Medical won a £95 million five-year contract to provide and operate 12 mobile MRI scanners for the NHS. [12] [13] [14]

Yet the MRI scanners which actually belong to local NHS trusts are often idle because the trusts cannot afford to run them. For example, according to the BBC, "One hospital with problems is The Royal Bolton, in Greater Manchester, which is treating patients with a mobile scanner while its own machine is often switched off. It should run for 10 sessions a week but the trust can only afford six." [15] Indeed, the government was warned that this could occur. At the time the Allliance Medical contract was announced, Professor Adrian Dixon from the Royal College of Radiologists cautioned: "There are a lot of MRI systems in hospitals which have just been put in by the government which are not running to full capacity. We hope [the deal] will not interfere with proper funding of these machines." [16]

The deal was announced by Health Minister John Hutton MP [17] [18], who just happens to be a longtime friend of Milburn, and as of January 2002 had been sharing a London flat with Milburn for the previous ten years. An interview with Hutton published at that time by Hospital Doctor magazine reported: "Doctors' leaders can expect Mr Hutton to take a similar tack to Health Secretary Alan Milburn. The pair are good friends and share similar views on 'where we need to be and where the NHS has to be'. Mr Hutton has shared a house in London with the Health Secretary for ten years. He reveals that neither of them cooks - opting for microwave meals instead." [19] Further evidence of their close friendship is the fact that when Hutton got married, Alan Milburn was his best man [20].

The Alliance Medical deal breaks a promise made by Labour in 1997. According to Solomon Hughes, a columnist for the left-leaning Red Pepper magazine, "After the 1997 election Labour said its privatisation programme would only embrace 'non-clinical' parts of the NHS. The DTC scheme ends this promise, but Labour actually started selling off clinical services much earlier. I recall sitting in a fringe meeting at the 2000 Labour Conference, at which an angry radiographer asked Alan Milburn why scanning services, although clearly 'clinical', were being privatised. The former health secretary did not answer." [21]

By February 2005, just over ten weeks out from a general election, the deal had become a liability for the Labour government with British newspapers reporting that doctors were branding it a "disaster". [22] [23] In April 2005, The Observer reported that the deal had failed to achieve its stated aim of reducing waiting lists for MRI scans: "A multi-million-pound government deal with a private company, aimed at clearing up the long waits for diagnostic scans for the NHS has backfired, leaving some patients waiting up to a year and a half for a scan." [24]

What a scan-deal: Labour gags one of its own MPs over the MRI contract

In March 2005, The Telegraph reported that Kevan Jones, MP for North Durham, had been told by Labour party officials to stop asking questions about the Alliance Medical deal. According to the article, Jones

"...was rebuked by local party officials after revealing that patients from his constituency were being sent 20 miles for private MRI scans, even though their own local hospital had a machine standing idle... The row originally appeared to be little more than a local furore. However, it led to serious concerns in the higher reaches of the Labour Party because of the links between Alliance Medical and Mr Milburn... [Mr Jones] described the situation that saw patients told to travel 20 miles to a hospital in Middlesbrough as 'frankly ridiculous' and warned ministers to put their plans for a greater private-sector involvement 'to one side'... His comments, The Telegraph understands, provoked a telephone call to the MP from a Labour Party official demanding an explanation and warning him that they should not be repeated." [25]

In April 2005, Solomon Hughes revealed that: "Using the Freedom of Information Act, Red Pepper uncovered papers showing that the original idea for the MRI scan contract had come not from the government but Alliance itself. The only difference between the deal that Alliance finally secured and what it had at first proposed is that the company had also wanted to provide endoscopies, and ultrasound and PET/CT scans. But good things come to those who wait: now health secretary John Reid has announced plans for a £1 billion contract that would result in Alliance carrying out these services for the NHS as well." [26]

However, when John Hutton was challenged by Kevan Jones in the House of Commons over the procurement process that led to the contract, he told a very different story: "Standard Government procurement processes were followed in which advertisements were placed and companies were invited to send in expressions of interest. Following a robust negotiation process, Alliance Medical was selected as the company that offered value for money and capacity to deliver services." [27]

Milburn attacked by female colleagues as 'patronising and arrogant'

In mid-December 2004, The Daily Telegraph claimed that Milburn had a disparaging attitude towards the views of his female ministerial colleagues. It reported:

"Leading figures including Patricia Hewitt, the Trade Secretary, and Harriet Harman, the Solicitor General, have accused Mr Milburn of personally snubbing them and of ignoring the needs of women voters... The latest row began last month when Mr Milburn was invited to a meeting by Ms Harman and Deborah Mattinson, the joint chief executive of the polling organisation Opinion Leader Research. The pair wanted to show him research on how the demands of women voters differed to those of men... According to one of those at the meeting, Mr Milburn arrived 15 minutes late, left early and showed a near-total disregard for the presentation by Ms Mattinson and Ms Harman." [28]

In mid-February 2005, The Independent reported that:

"Alan Milburn secretly told Labour activists yesterday that the party needs to keep up its 'dirty tricks' campaign to raise public interest in the coming general election, or see the Government's 161-seat majority wiped out by a record low turn-out. Labour's election boss defended the tactics at a private briefing for delegates, after posters attacking the Tory leader Michael Howard and deemed anti-Semitic were withdrawn last week. Private polling shared with senior cabinet figures last week has led them to believe Labour cannot allow the election to become a referendum on its own performance but must involve the Tories in a political scrap." [29]

Alan Milburn's entry in the Register of Members's Interests, via TheyWorkForYou.com, as at 22nd October 2004 [30]: