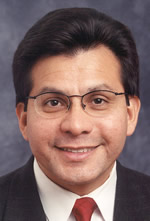 Alberto R. Gonzales (Al Gonzales), who served as White House Counsel to President George W. Bush, "whose tenure has been marred by controversy and accusations of perjury before Congress," announced on August 27, 2007 that his resignation was accepted the day before by President Bush.[1] He departed from office September 17, 2007.[2][3][4][5]

Gonzales' Testimony before the Senate Committee on the Judiciary, April 19, 2007

Gonzales "lawyers up for investigations"

"Former Attorney General Alberto Gonzales has hired a 'high-powered Washington criminal-defense lawyer' named George Terwilliger 'to represent him in inquires by Congress and the Justice Department.' Their 'top concern' is that DoJ Inspector General Glenn Fine may make 'a criminal referral to the Public Integrity Section of the Justice Department–or even seek the appointment of a special counsel to determine if Gonzales made false statements to Congress.'"[7]

"Investigators are look[ing] into allegations that Gonzales lied to lawmakers and illegally allowed politics to influence hiring and firing at the department."[8]

On August 28, 2007, Terwilliger's name was among those of the top five contenders to replace Gonzales as Attorney General.[9]

Terwilliger, a partner in the Washington, D.C. office of international law firm White & Case LLP, served as a deputy attorney general under President George H.W. Bush and led the team for the 2000 Florida recount for President George W. Bush.

In response to Gonzales' attorney general nomination, the conservative group Focus on the Family's vice president for public policy, Tom Minnery, complained that Gonzales did not have "strong pro-life beliefs." Minnery said, "Putting someone like that in such an independent role as a federal judge is a problem for us. But as attorney general, the social issues are not as prominent as the law enforcement issues." For that apparent reason, Focus on the Family supported Gonzales' nomination. [1]

On the other hand, "Many conservatives interpreted the Gonzales appointment as a sign that Bush is preparing to nominate a more ideological figure to the Supreme Court. 'I find it reassuring,' said Jeffrey Bell, a consultant with ties to religious conservatives. 'It shows that Bush is a loyal person, which on a different level assures people who care about the Supreme Court.'" [2]

The New York Times, relying on "Republicans close to the White House," reported that Gonzales' attorney general nomination was "part of a political strategy to bolster Mr. Gonzales's credentials with conservatives and position him for a possible Supreme Court appointment." One source said, "Mr. Gonzales's nomination hearings in Congress would also 'get out of the way' the debate over legal memorandums that Mr. Gonzales supervised as White House counsel." Another benefit of Gonzales' possible Justice Department appointment would allow him to "demonstrate his reliability to conservative leaders" before being nominated to the Supreme Court. In addition, according to the Republican source, "Mr. Bush will be at the apex of his power at the beginning of the second term," and able to nominate a more extreme candidate for the first Supreme Court vacancy. "You do the toughest nominee first," he said. This strategy was said to be "in large part the work of Karl Rove." [3]

A few weeks after Gonzales' nomination was announced, 30 rights groups and members of the Washington, DC-based Leadership Conference on Civil Rights "called on the chairman (Senator Orrin G. Hatch (R-Utah)) and ranking member (Senator Patrick J. Leahy (D-Vt.)) of the Senate Judiciary Committee to closely examine [Gonzales'] civil rights record." In a letter, the groups noted Gonzales' role in setting Bush administration policy on the detention and interrogation of prisoners at Guantanamo Bay, Cuba and in Iraq, saying, "We believe that there are aspects of Mr. Gonzales' record that raise concerns and that must be closely scrutinized by the Judiciary Committee." The Washington Post noted that two major Latino organizations, the National Council of La Raza and the Mexican American Legal Defense and Education Fund, did not sign the letter. [4]

Defending the U.S. War on Terror

As White House Counsel, "Gonzales provide[d] Bush with the legal grounding for an aggressive assertion of executive authority in disputes with Congress and of government power in the war on terrorism. Known as 'the Judge' because of his brief service as a Bush appointee to the Texas Supreme Court, Gonzales is considered a likely nominee to the U.S. Supreme Court, should Bush have the opportunity." [5]

In January 2002, Gonzales authored a memo which "said the Geneva Convention that had long governed the treatment of prisoners did not apply to al-Qaida or the war in Afghanistan. The memo called some of the Geneva Convention's provisions 'quaint.' Gonzales also defended the administration's policy - essentially repudiated by the Supreme Court and now being fought out in lower courts - of detaining certain terrorism suspects for extended periods without access to lawyers or courts." [6]

In August 2002, Gonzales' office helped prepare a memo from the Justice Department's Office of Legal Counsel, "advising that torturing alleged al Qaeda terrorists in captivity abroad 'may be justified' and that international laws against torture 'may be unconstitutional if applied to interrogations' conducted in the U.S. war on terrorism. Gonzales held a news briefing to distance himself from the memo after it became public, calling it, in part, 'irrelevant and unnecessary' and 'overbroad.'" [7]

Retired General Jim Cullen of the U.S. Army Court of Criminal Appeals "says Gonzales directly contradicted established military and international law," wrote Nat Hentoff. Cullen claims that Gonzales deliberately left top military legal experts out of discussions on the new detention and interrogation policies, because Gonzales realized that "the Judge Advocate Generals Corps would never sanction departures from the Geneva Conventions or engaging in practices that the common man would regard as torture." [8]

Ralph Neas, president of the People for the American Way, said in response to Gonzales' nomination to Attorney General, "Alberto Gonzales' role in the development of policies that ultimately led to the Abu Ghraib prison scandals in Iraq is deeply troubling." [9]

Gonzales, the Press and the Right to Know

Joe Strupp of Editor and Publisher wrote, "Reporters and editors shouldn't expect Alberto Gonzales ... to be very responsive to press demands for access, given comments he made to a group of editors just two years ago." In October 2002, Gonzales told the Associated Press Managing Editors conference, "There is a danger for the president's lawyer to be addressing a roomful of editors. ... You have a right to know what is going on in government. But we also believe such rights are not absolute." In the same speech, Gonzales said regarding delayed or ignored Freedom of Information Act requests that it was "permissible under law" for federal agencies to withhold information. [10]

On November 15, 2004, the Reporters Committee for Freedom of the Press release a report entitled, "Evaluation of the likely impact of Attorney General Nominee Alberto Gonzales on Press Freedoms and the Public's Right to Know." The report notes that, as White House Counsel, "Gonzales has been an active defender of what is best described as a quasi-executive privilege, invoked repeatedly by the Bush administration in attempts to keep government information from public scrutiny. ... The quasi-executive privilege is so named because the privilege's breadth, as defined by the Bush administration, is much greater than what is commonly known by lawyers as the executive privilege." [11]

While running for a seat on the Texas Supreme Court, "Enron and Enron's law firm were Gonzales's biggest contributors," including $35,450 in donations in 2000, according to New York Daily News. Energy industry donations to Gonzales during this time totaled $100,000. In May 2000, "Gonzales was author of a state Supreme Court opinion that handed the energy industry one of its biggest Texas legal victories in recent history." After becoming White House Counsel, Gonzales has played a role in keeping details about Vice President Dick Cheney's meetings with his energy task force secret, according to the Center for American Progress. [13]

Texas and the Death Penalty

Gonzales "was the second Hispanic to serve on the Texas Supreme Court. Before Bush appointed him to the high court, he served as secretary of state and as the Texas governor's staff general counsel." [14]

During his stint as Texas general counsel, Gonzales helped prepare memos on 57 death penalty cases for which then-Governor Bush had to consider granting clemency. The Atlantic Monthly found that Gonzales "repeatedly failed to apprise the governor of crucial issues in the cases at hand: ineffective counsel, conflict of interest, mitigating evidence, even actual evidence of innocence." He also seemed to discount such mitigating factors as "mental illness or incompetence, childhood physical or sexual abuse, remorse, rehabilitation or racial discrimination in jury selection." [15]

Bush subsequently allowed 56 of the 57 people involved to be executed, including Terry Washington, a 33-year-old mentally handicapped man with the communications skills of a seven-year-old. [16]

On February 3, 2005, the U.S. Senate confirmed Alberto Gonzales as the next attorney general, but did so with the second highest number of "no" votes ever for a successful nominee for the post. The following Democrat Senators -- members of the Senate New Democrat Coalition and the Senate Centrist Coalition -- voted for Gonzales:

Members of Congress on Gonzales

During 2007, in the face of multiple scandals including the Bush administration U.S. attorney firings controversy, Congressional support for Gonzales dwindled, leaving many members of Congress calling for his removal.

Attorney General Alberto Gonzales announced his resignation on Monday, August 27, 2007. Senate Judiciary Chairman Patrick Leahy (D-Vt.), who had clashed with Gonzales repeatedly during Gonzales's testimony relating to the warrantless wiretapping inquiries and the U.S. attorney firings scandal, commented that his resignation “will be a step toward getting to the truth about the level of political influence this White House wields over the Department of Justice and toward reconstituting its leadership so that the American people can renew their faith in its role as our leading law enforcement agency.”

Alberto Gonzales and President Bush both addressed the resignation that day.[10] In a press conference, Gonzales announced, "Yesterday I met with President Bush and informed him of my decision to conclude my government services as Attorney General of the United States effective September 17." He took no questions from reporters afterwards. [11]