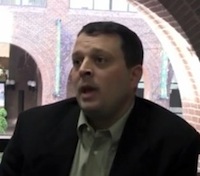 Alex Avery is the Director of Research and Education at the Center for Global Food Issues (CGFI), a project of the Hudson Institute. The Hudson Institute receives funding from big agribusiness interests, including Monsanto, DowElanco, the Ag-Chem Equipment Company and Syngenta which are involved in agriculture biotechnology.[1][2]

According to a biographical profile on the CGFI website, prior "to joining Hudson in 1994, he was a McKnight research fellow at Purdue University, where he worked to develop drought-resistant sorghum varieties for the Sudan of Africa."[3]

"Since joining the Center in 1994, Avery has spoken to a wide variety of national and international audiences and has represented the Center at the United Nations World Food Summit in Rome," his bio note states.[3] According to his bio note, Alex Avery's articles have "appeared in many publications, including the Des Moines Register, USA Today Magazine, The Washington Times, and Canada's Western Producer.[3]

Avery's biographical note states that he authored a "peer-reviewed study documenting that nitrates in drinking water do not cause the infamous 'blue baby syndrome' in infants". [3]

However, his initial study - "Infantile Methemoglobinemia: Reexamining the Role of Drinking Water Nitrates" which was published in the July 1999 edition of the U.S. National Institute of Environmental Health Sciences journal Environmental Health Perspectives - was more equivocal than his biographical note makes out.

"Recent research and a review of historical cases offer a more complex picture of the causes of infantile methemoglobinemia. Gastrointestinal infection and inflammation and the ensuing overproduction of nitric oxide may be the cause of many cases of infantile methemoglobinemia previously attributed to drinking water nitrates," the abstract stated.

"If so, current limits on allowable levels of nitrates in drinking water, which are based solely on the health threat of infantile methemoglobinemia, may be unnecessarily strict," he wrote.[4]

Avery took issue with an editorial in The Des Moines Register calling for more responsible farming to prevent the pollution of water sources with nitrogen. "While the goal of limiting nitrogen losses from farmland is sound, the editorial missed the boat on the health risks from nitrates," Avery wrote. Avery argued that the EPA mandated limit of 10 parts per million in water supply could safely be doubled. "Raising the federal standard to just 20 ppm would not raise the health risk to small infants or the general public, but it would eliminate the need to treat Des Moines' drinking water, saving millions of dollars," he wrote. [5]

Dennis too, took the issue up in an article for the Hudson Institute. Avery senior objected to 1977 proposals by the Environmental Working Group, a Washington-based environmental organization, that the drinking water nitrate limit should be halved to 5 parts per million. Where Alex's paper had suggested that causes other than nitrates "may" be the cause of the baby blue syndrome, Avery senior found no need to repeat the qualification. "Now, a study in the July issue of Environmental Health Perspectives, a publication of the U.S. National Institute of Environmental Health Sciences, says that nitrate doesn't cause blue baby syndrome after all," wrote Dennis, who later in the article disclosed his son had authored the report. A limit of 20 parts per million, he wrote, "would take the regulatory pressure off good farmers with no additional risk to infants".[6]

In late 2003, Alex was back on the case. In an article published on the Heartland Institute's website, Alex stated that "nitrate levels in drinking water are regulated for one reason only: to prevent blue baby syndrome, medically known as infantile methemoglobinemia," he wrote. "That regulation is costing U.S. communities and homeowners hundreds of millions of dollars per year, and the cost is increasing," he wrote, demanding that Congress should demand the National Research Council institute a scientific review of the nitrate level.[7]

Associate director at the Center for Health Effects of Environmental Contamination, University of Iowa, Peter Weyer, expressed his concern when Avery's paper was first published. "The potential long-term health impacts and related costs to society could be staggering. Rather than relaxing the MCL, we should be working towards preventing contamination of water supplies by nitrate (whatever the source) as a prudent effort towards reducing potential risk to the public's health," he wrote.[8]

The National Center for Appropriate Technology argued that Avery's argument had major flaws. "While the nitrate in contaminated water does not appear to cause methemoglobinemia, it can certainly affect the severity of an attack, by increasing the amount and concentration of nitrates and nitrites the body must contend with. Excess nitrates have been associated with other health problems for both humans and livestock, including questions regarding its carcinogenic and teratogenic effects", he wrote.[9]