Ali Abunimah is a co-founder of ElectronicIntifada. 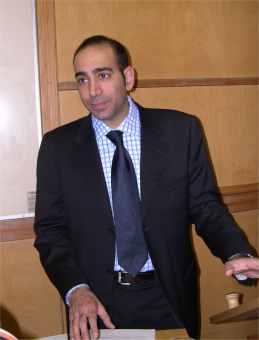 "Ali Abunimah, a writer and commentator on Middle East and Arab-American affairs, lives in Chicago. His articles have appeared in The New York Times, The Los Angeles Times, The Chicago Tribune, The Financial Times, The Philadelphia Inquirer, The Jordan Times, Lebanon's Daily Star and Ha'aretz, among others. He is frequent guest on local, national and international radio and television, including public radio and television, CNN, MSNBC, Fox, the BBC and many others. Abunimah lectures frequently at colleges in the United States. He was born in the United States and grew up in Europe. Both of his parents are originally from Palestine. He received his BA from Princeton University and MA from the University of Chicago. Abunimah travels often to the Middle East and is a full-time researcher in social policy at the University of Chicago. Recent book contributions include "No Justice, No Peace," in "The Anti-Capitalism Reader," edited by Joel Schalit. New York: Akashic Books, 2002; "The US Media and the New Intifada" (with Hussein Ibish) in "The New Intifada," edited by Roane Carey. New York: Verso Books, 2001; "The Palestinian Right of Return" (with Hussein Ibish), Washington, DC: ADC, 2001; "The Media's Deadly Spin on Iraq" (with Rania Masri) in "Iraq Under Siege" edited by Anthony Arnove. Cambridge, MA: South End Press, 2002 (Updated Edition)." [1]

In October 2007 Ali Abunimah criticised the work of MADRE. [2]