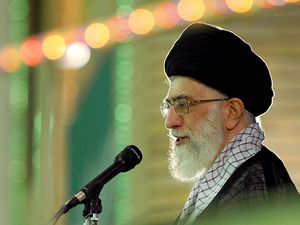 Grand Ayatollah Ali Khamenei is the head of state of the Islamic Republic of Iran. He is the most powerful leader in the country. [1][2] Ayatullah Haajj Sayyid Ali Khamenei was born in 1939 in the northeastern Iranian city of Mashhad. [3]

Khamenei has a sound understanding of Arabic and has translated four Arabic books into Farsi including An Indictment against the Western Civilization by Sayyed Qutb. [4]

Khamenei had the title hojjat al-Islam at the time of the Islamic Revolution. He had became an ayatollah by 1985[5]. In 1994, Khamenei was conferred the title grand ayatollah by the Society of Teachers of Qom Theological Seminary. [6]

Imam Khamenei[7] is the highest-ranking Islamic cleric in Shia Islam [8] which means that his fatwas override that of others. Moreover, he has the final say in the actions of the Islamic group in Lebanon known as Hezbollah.[9] He also commands a following in Iraq as an Islamic jurisprudent[8]. Moreover, he is widely respected in the Islamic community of Nigeria[10] and Jammu and Kashmir.[11]

Khamenei has supporters in the Palestinian territories[12] who are predominantly Sunni Muslims.

Some Islamic reformers downplay Khamenei's religious authority and perennially address him as Hujjat Al-Islam[13] and claim that he had not become an ayatollah until the 1990s.

Khamenei has urged greater Muslim unity among Shia and Sunni Muslims[14] and believes that there are plots to divide Muslims and sow discord.

Khamenei believes that "A deviation from morals and spirituality is the origin of all problems in the world including wars and insecurity."[15]

In late 1996, following a fatwa by Khamenei stating that music education corrupts the minds of young children, many music schools were closed and music instruction to children under the age of 16 was banned by public establishments (although private instruction continued).[16] Khamenei stated: "The promotion of music [both traditional and Western] in schools is contrary to the goals and teachings of Islam, regardless of age and level of study".[17]

Khamenei has asserted that moves to "push Iranian youth toward carnal desires, drugs, or sexuality" should be combated.[18]

Khamenei claims that "Today, homosexuality is a major problem in the western world. They [western nations] however ignore it. But the reality is that homosexuality has become a serious challenge, pain and unsolvable problem for the intellectuals in the west."[19] Khamenei did not name these western intellectuals.

In 2007, Iranian police which acts under the control of Supreme leader, launched a "Social Security Plan": The police arrested dozens of "thugs" to increase public security. The arrested "thugs" are sometimes beaten on camera in front of neighborhood inhabitants, or forced to wear hanging watering cans used for lavatory ablutions around their necks.[20] During the first three months of the campaign against women not adhering fully to the strict Islamic dress code, in Tehran alone 62,785 women were stopped by police, and of these 1,837 were arrested. In the first three months, police arrested in the capital more than 8,000 young "criminals" who have offended public morals.

The Islamic Republic has not yet allowed a single Sunni mosque to be built in Tehran; although President Mohammad Khatami promised during election time to build a Sunni mosque in Tehran. After he won the elections, he was reminded of his promise but he said that the Supreme Leader Ayatollah Ali Khamenei had not agreed to the proposal.[21]

Imam Khamenei exercises many powers traditionally given to the president of a republic like appointing members of the judiciary[22]. For this reason, the Islamic Republic of Iran is seen by some as a caliphate[23] with the same religious and political leader. Nevertheless, there are regular elections in Iran.

Khamenei, as the Supreme Leader, has control over the foreign policy of Iran[24]which in most republics is within the domain of the president. He is a strong supporter of the 6th president of the Islamic Republic, Mahmoud Ahmadinejad.[25]

Khamenei has directed the Guardian Council to not ignore the religious law when the council ratifies the decision of Islamic Consultative Assembly.[26]

Khamenei is an overt supporter of the enforcement of Islamic morality[27]. Since the 1979 Islamic Revolution, Iran has maintained to an Islamic religious police which is, inter alia, referred to as a "social security plan"[28][29]--albeit this is completely unrelated to economic aid for the retired, unemployed, disabled, etc. In November 2007, concerning the enforcement of the Islamic moral code in Iran, he stated, "The police must strongly continue with the 'social security plan' and avoid seasonal and temporary initiatives so that its goals are institutionalized in society."[30] According to the official Islamic Republic News Agency, he urged[31] the nation's police to "fulfill their mission and duty irrespective of controversies, hues and cries."[32]

With respect to economic policy, Khamenei has given his backing for the privatization of many large Iranian industries such as banking, steel, petrochemicals, mining, energy and telecommunication.[33]

In July 2007, Khamenei criticized Iranian women's rights activists and the Convention on the Elimination of All Forms of Discrimination Against Women (CEDAW): "In our country ... some activist women, and some men, have been trying to play with Islamic rules in order to match international conventions related to women," Khamenei said. "This is wrong."[34] However, he is positive on reinterpreting Islamic law in a way that it is more favorable to women - but not by following Western conventions.[35] Khamenei made these comments two days after Iranian women's rights activist Delaram Ali was sentenced to 34 months of jail and 10 lashes by Iran's judiciary.[36] Iran's judiciary works under the auspices of the supreme leader and is independent from the government.

In 2000, Ali Khamenei sent a letter to the Islamic Consultative Assembly forbidding the legislature from debating a revision of the Iranian press law. He wrote: "The present press law has succeeded to a point in preventing this big plague. The draft bill is not legitimate and in the interests of the system and the revolution."[37] His use of "extra-legislative power" has been criticized widely by reformists and opposition groups. In reaction to the letter, some Parliament members voiced outrage and threatened to resign.[38] Kayhan and Jomhuri-ye Eslami are two newspapers published under the management of Khamenei.

Imam Khamenei is a fierce opponent of independent media[39] especially those that "insult the Constitution, insult the country's policies, they exaggerate issues...accuse the [Islamic] Revolution Guards and the Basij [paramilitary forces] and the clergy."[40].

Khamenei, in 2007, called for George W. Bush to be tried for the chaos in Iraq. He said, "I have a firm belief that one day this current US president and the American officials will be tried in a fair international court for the atrocities committed in Iraq."[41]

Khamenei expressed approval of Iran's president, Mahmoud Ahmadinejad, in August 2008 by calling him "a shining medal"[42] and urged him to run for re-election in 2009. Khamenei has declared, "The government of Ahmadinejad has stopped the process of Westernization and secularization that had begun to infiltrate the decision-making processes of the country."[43]

Khamenei has claimed the United States wants to undermine the relations between Iraq and Iraq.[44] He desired the "two countries should resist the damage."

In a meeting with the Iraqi president Jalal Talabani in June of 2007, Khamenei said, "Those mainly behind the insecurity of Iraq and catastrophes (in Iraq) are the spy networks of America, the Zionist regime (Israel) and some countries who walk beside them." Khamenei also expressed support for the government of Iraq that is in control in the midst of the War in Iraq.[45]

Khamenei has dismissed charges that Iran is interfering in Iraq. "American accusations against Iran about Iraq, Palestine, Lebanon and Afghanistan are unfounded," he said.[46]

Khamenei has cordially exhorted Iraqi leaders to ask the American forces to leave Iraq; typically, during state visits of Iraqi politicians, Khamenei deplores the presence of Americans military on Iraqi soil.[47] For example, in June 2008, Khamenei told Iraqi Prime Minister Nouri al-Maliki that "The occupation forces...are now the main obstacle in the way of the Iraqi government and nation."[48]

Khamenei "fully backs Iraq's popular government."[49] Furthermore, he has never called for jihad against the American military forces in Iraq nor has he owned up to accusations that Iran is contributing to the unrest in Iraq by supporting certain militias.

Iranian officials are against peace with Israel[50][51] because "The Palestinian cause is the cause of the entire Islamic world."[52] Khamenei himself backs martyrdom operations[53].

Khamenei is opposed to Israel's right to exist.[63] In October 2007, he spoke against a U.S.-sponsored Middle East conference for peace between Israelis and Palestinians[64] and called it a "mischievous deception".[65]

Khamenei fully supports the nuclear program of Iran.[66] According to him, "The Iranian nation will pursue its right and the disturbances will have no effect."[67] Moreover, he has indicated that the regime isn't seeking atomic weapons[68][69], only civilian uses of nuclear energy.

Concerning those political figures who have spoken of military strikes to cause Iran to abandon its nuclear program, Khamenei has stated, "Those who make threats should know that attack on Iran in the form of hit and run[70][71] will not be possible and if any country invades Iran it will face its very serious consequences."[72] In one speech in July 2008, Khamenei warned that Iran would "cut off the hand" of any aggressor against the Islamic Republic.[73]

Additionally, in May 2008, Khamenei stated that economic sanctions cannot be used to force Iran to change its course of utilizing nuclear technology.[74]

In a landmark visit by a Russian head of state, Vladimir Putin met with Khamenei[75] in October 2007 where he made an undisclosed propsal concerning the nuclear program of Iran.[76] Khamenei responded to Putin by saying,"We will think about what you said and about your proposal."[77]

Khamenei became the Supreme Leader of Muslims in Iran on 4 June 1989 in a decision of the Assembly of Experts which is composed of senior Islamic clerics.

After the death of Imam Khomeini, the position of the prime minister was eliminated. Next, the president became the head of government while the Supreme Leader became the de jure and de facto head of state.

As of May 2008, Khamenei had not given an interview to members of the foreign press in 10 years.[83]

Khamenei is not universally acknowledged as the genuine leader of Iran by certain politicians outside Iran. For example, John McCain has been accused of "Deception or ignorance"[84] for his insistence[85] that Mahmoud Ahmadinejad as opposed Khamenei is the leader of Iran.[86] Some characterized his remarks as a "gaffe."[87] During the 2008 vice-presidential debate in the United States, Joseph Biden also corrected Sarah Palin when he said, "Ahmadinejad does not control the security apparatus in Iran. The theocracy [mullahs] controls the security apparatus."[88]

Iran has good relations with many African countries. However, none are of the form of a military alliance.

In August 2008, Algerian President Abdelaziz Bouteflika was received by Khamenei in Tehran.[89] They had a friendly discussion whereat Khamenei stressed that Islamic nations have great potential. Algerian relations with Iran were suspended between 1993 and 2000 because of Iran's alleged support for the Islamic Salvation Front.[90] 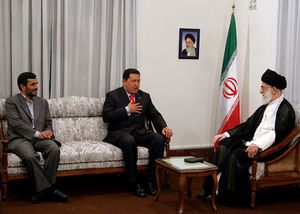 Hugo Chavez in the center with Ali Khamenei on the right.

Khamenei has met Latin American leaders like Daniel Ortega and Hugo Chavez.[91] He desires to strengthen the economic cooperation and political alliance of anti-American nations which he deems independent ones.[92]

Iran's bilateral relations are more friendly towards Syria than any other country in west Asia. During an August 2008 visit by Syrian President Bashar al-Assad, Khamenei expressed the hope that the bilateral relations of Iran and Syria would be bolstered.[93] 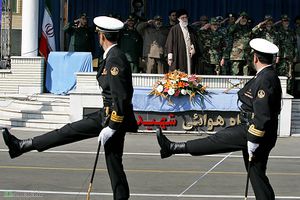 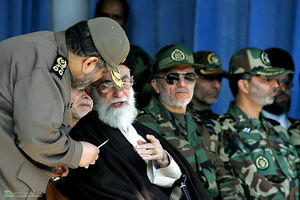 Khamenei speaks to a military commander during the graduation ceremony of cadets in 2007.

In August 2007, Imam Khamenei appointed Habibollah Sayyari to replace Sajjad Kouchaki as the naval commander of the Islamic Republic.[94][95]

Later, in September 2007, Imam Khamenei appointed Mohammad Ali Jafari to the post of the commander of the Islamic Revolution Guards Corps.[96] The position was previously held by Yahya Rahim Safavi.[97][98]