The American Life League' (ALL) is an Catholic anti-abortion organization whose stated mission is "to serve God by helping to build a society that respects and protects innocent human life from fertilization to natural death - without compromise, without exception, without apology. The distinguishing mark of American Life League, by which we will be recognized, is our absolute commitment to the sacredness of human life."[1]

The American Life League was identified as the organization that distributed professionally-made signs that read, "Bury Obamacare with Kennedy" at a conservative rally in Washington, D.C. on September 12, 2009. [2][3] The sign referred to longtime Democratic Senator Ted Kennedy (D-Mass), who died from brain cancer on August 28, 2009, just two weeks before the September 12 rally.[4] 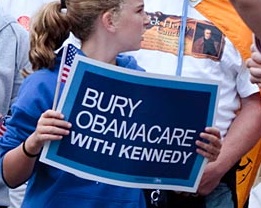 Sign distributed by ALL seen at September 12, 2009 conservative rally in Washington, D.C.

On June 7, 2008 (the anniversary of the 1965 Supreme Court Ruling Griswold v. Connecticut, which gave married couples the right to use contraception), ALL plans to kick off a national anti-contraception campaign called "The Pill Kills 2008," in which they will try to convince Americans that oral contraception "kills babies."[5]