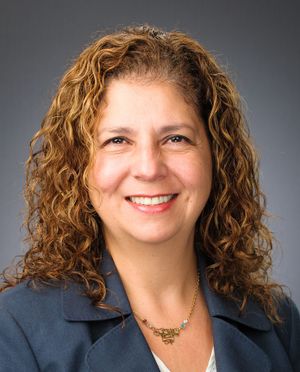 Ana Ponce is the “Chief Executive Officer of Camino Nuevo Charter Academy (CNCA), a network of high performing charter schools serving more than 3200 Pre-K through 12th-grade students in the greater MacArthur Park neighborhood near Downtown Los Angeles. CNCA schools are recognized as models for serving predominantly Latino English Language Learners and have won various awards and distinctions including the Title 1 Academic Achievement Award, the California Association of Bilingual Education Seal of Excellence, the California Distinguished Schools award, and the Effective Practice Incentive Community (EPIC) award. Born in Mexico, Ana is committed to providing high-quality educational options for immigrant families in the neighborhood where she grew up.[1]

"An alumnus of Teach for America, Ponce spent three years in the classroom before becoming one of the founding teachers and administrators at The Accelerated School, the first independent charter school in South Los Angeles. Under her instructional leadership, The Accelerated School was named elementary school of the year by Time Magazine in 2001. Ms. Ponce earned her undergraduate degree from Middlebury College and a master's degree in Bilingual-Bicultural Education from Teachers College, Columbia University. She earned her administrative Tier 1 credential and second master's degree from UCLA through the Principal's Leadership Institute (PLI) and earned a Doctorate in Educational Leadership from Loyola Marymount University. A veteran of the charter schools movement in California, she serves on the Board of the California Charter Schools Association.”[1]

In August 2016, the Gates Foundation funded a corporate reform nonprofit called Education Leaders of Color (EdLoC). Ana Ponce is on the leadership committee of EdLoC.[3] The majority of EdLoC’s team have connections to Teach for America (TFA) and The New Teacher Project (TNTP). The nonprofit seeks to “put a new, not-so-white face on the worn-out wonders of test-centric, privatizing reforms” like those pushed by TFA and TNTP.[4]

In 2012, Ponce spoke at a rally of charter school advocates in Los Angeles organized in partnership with education reform organizations including Democrats for Education Reform (DFER).[7] Ponce also donated to former California State Senator Gloria Romero’s campaign for Superintendent of Public Instruction in 2009.[8][9] Romero was tapped to lead DFER’s California expansion initiative in 2010.[10]

In 2011, Ponce was included on a list of “The World’s 7 Most Powerful Educators” written by Wendy Knopp, founder of TFA. The list included only one teacher who had passed away that year, and the rest were connected in some way to TFA, the KIPP charter school movement, or the pro-school choice movement.[11]

Ponce is the Board Secretary of the California Charter Schools Association, with her term ending June 30, 2018.[12] According to The California Charter Schools Association website, the organization “advances the charter school movement through state and local advocacy, leadership on accountability, and resources for member schools.” CCSA claims it is “a trusted source of data and information on California's charter schools for parents, authorizers, legislators, the press and other interested groups.”[13]

According to the Los Angeles Times, Netflix founder Reed Hastings “has contributed close to $5 million...to the California Charter Schools Assn. Advocates, a major conduit of funds for school board candidates backed by charter school supporters. His most recent contribution was $1 million on Tuesday. Another major recent contributor is a familiar name in education politics. Eli Broad put in $400,000 last Friday.”[14] According to EducationNext.org, Hastings “has given millions of dollars to start charter schools. He’s put millions more into developing education software to personalize learning. But he doesn’t just give money. He makes things change. And he is not a fan of school boards.”[15]

According to EducationNext.org, Hastings became “intrigued” by the charter school movement and reached out to advocates like Don Shalvey, who now oversees the Gates Foundation’s “efforts to advance college-ready rates in states, school districts, and networks of high performing charter schools.” In 1998, “Hastings teamed with Shalvey to write a statewide ballot initiative lifting California’s charter cap and making it easier to start a charter school. Hastings became president of Technology Network, a bipartisan lobbying group formed by Silicon Valley CEOs. TechNet put its political and financial clout behind the petition drive. When the initiative collected more than a million signatures, the opposition caved. Hastings and Shalvey agreed to drop the initiative if the legislature passed the charter law written by an ally in the legislature.”[15][16]