The Business Industry Political Action Committee (BIPAC) is a political action committee (PAC) that aims to help companies influence their employees' votes. BIPAC's website describes the organization's goal as "to improve the political climate in America for the business community and help job providers play a more active role in the public policy and political process."[1] BIPAC's slogan is "When Business Votes, Business Wins."[2]

According to a 2014 report by Slate, BIPAC does engage in the traditional activities of a PAC by donating directly to political campaigns, but its main aim "is to turn as many private employers as possible into “employee political education” machines for business interests."[3] BIPAC claims that in the 2014 election cycle, affiliated corporate PACs using BIPAC's services contributed $80 million to political candidates, and that BIPAC sent 3.7 million messages from affiliates' employees to legislators.[4] Corporations affiliated with BIPAC include ConocoPhillips, ExxonMobil, BP, Campbell Soup, eBay, Nationwide Insurance, and Walmart.[3]

BIPAC has two main components, according to its website:

"The BIPAC corporation, referred to as the Business Institute for Political Analysis or Institute is the primary core of BIPAC operations and is totally supported by corporate donations of its business and association members. The Institute provides business with political research and analysis through publications, conferences and consulting. Contributions to the Institute are not tax deductible as charitable contributions but may be deductible as an ordinary business expense to the extent the law allows... BIPAC’s Institute does not have an IRS tax exemption status and, as a result, is not required to divulge the list of its members to any government entity… Our Prosperity Project operates as part of the Institute.

As of 2015, BIPAC is comprised of several legal entities:

BIPAC builds and hosts websites for corporations that link employees to BIPAC's ratings of politicians and candidates for office[3] and encourage them to send pre-drafted messages to their legislators. Some of these efforts have been described by In These Times:

On a BIPAC-hosted site, the fast-food giant Wendy’s asks visitors to write letters to their legislators about the “misguided” current proposal to raise the minimum wage to $10.10 an hour.[12]

A National Restaurant Association “Action Alert Sample” also found on BIPAC’s server, apparently aimed at the Senate’s 2010 crafting of the Affordable Care Act (ACA), urges people to write their senators to argue for small businesses and part-time workers to be exempted from the ACA. Both of these policy preferences were ultimately adopted in the final version of the healthcare reform law.[12]

According to BIPAC, more than 80 percent of the candidates BIPAC Action Fund endorsed in 2014 won their races.[13]

BIPAC's Claim to Be Nonpartisan

BIPAC states that it is a non-partisan organization,[1] but "shows a strong preference for Republican candidates," according to In These Times,[12] and has tended to highlight right-wing policies such as voter ID bills and opposing minimum wage increases, according to The Washington Post.[14] Around 89 percent of candidates supported by BIPAC have been Republicans, Reuters estimates.[15] See also PAC Activities below.

In 2004 then-BIPAC president Greg Casey said that BIPAC only tells business employees "how the issues impact them," and not who to vote for,[16] but he was also quoted as saying that 2004 Democratic presidential candidate John Kerry's choice of John Edwards as his running mate "is a statement to the business community that 'you don't count',"[17] and calling Kerry "not a business candidate. He hasn't even pretend (sic) to be."[18]

BIPAC claims that many employees want their employers to share information about politics, and company representatives have told reporters that employee participation in political contributions and activities is voluntary.[3][15] But the nature of the workplace and incentives given by companies have have raised concerns among some FEC officials about just how voluntary participation is at many workplaces, as Reuters reports:

"What I worry about is the inherently coercive nature of these workplace situations," Democratic FEC Commissioner Ellen Weintraub said.

"Let’s say an employer decides to throw corporate resources behind a candidate and sets up a phone bank, asking employees to get on the phone to get people to support candidate Jones. It’s very hard to say no to your employer. It puts the employee, especially the low-level employee, in a very difficult position."[15]

Some employers offer perks to employees who make contributions to corporate PACs.

Pfizer emails employees to encourage them to contact politicians on legislation of interest to the company, such as patent legislation, and Koch Industries "sent its employees a voter packet informing them which candidates, including Republican nominee Mitt Romney, the company supported, as well as an editorial knocking President Barack Obama."[15]

Some employees have reported feeling pressured to participate or to have experienced retribution for not participating in their company's political activities. Workers in the Alaskan oil industry told Slate that they "feared being blacklisted" for talking about BIPAC and political messaging in their companies related a ballot measure that would have repealed an industry tax cut.[3]

"They let it be known that if SB 21 was repealed that there would be layoffs," said one BP employee, referring to Alaska’s Ballot Measure 1. "It was clear how they wanted us to vote."[3]
He said it was "absolutely not" an environment in which it was acceptable to express any dissent over management’s political positions. An email sent to every BP employee in Alaska, and obtained by the Investigative Fund, encouraged employees to wave signs rejecting repeal along some of Anchorage’s busiest thoroughfares.[3]

Concentration in Financial and Insurance Industries

A confidential BIPAC slideshow obtained by In These Times in 2014 reported internal data the BIPAC's networks covered some 25 million employees, 19.7 million of whom worked in the financial and insurance sectors.[12]

BIPAC established the Friends of Adam Smith Foundation in 2000 in order to "to research and promote the historical and relevant link between politics, public policy and economic freedom."[19] The foundation hosts an annual Adam Smith Dinner at which its Adam Smith Award is given to public officials and "business citizens."[20] 2014 Adam Smith awards were given to Sen. Bob Corker (R-TN) and Jay Timmons, President and Chief Executive of the National Association of Manufacturers. Previous honorees include J. Larry Nichols, chair and CEO of Devon Energy, Lee Raymond, chair and CEO of Exxon Mobil, and Dick Cheney, chair and CEO of Halliburton.[21] Additional awardees are listed on the Friends of Adam Smith Foundation website.

BIPAC was formed in August 1963 as "the first business PAC."[22] Its initial funding and staff came from the National Association of Manufacturers. In the 1980s, BIPAC began producing "a monthly report on politics and political races, known today as Elections Insight, and a now-popular series of Washington Briefings" in addition to holding "formal briefings across the country."[23] In the 1990s, BIPAC created the "PAC Council - providing companies with a rich set of resources with which to invigorate corporate PACs and integrate them more firmly at all levels of political decision-making" and started awarding Adam Smith Awards, to recognize "individuals in business and politics whose actions exemplify Adam Smith's concept of the link between free enterprise and a democratic society."[24] BIPAC formed Project 2000 (now known as the Prosperity Project) "to lead the business community out of the era of huge 'soft money' donations and into a new way of doing political business - working at the grass roots to marshal the vast army of American workers in support of the people and policies that advance their jobs, their investments, and their industries."[25]

"Exxon Mobil, PPG Industries, Caterpillar, Household International and half the Fortune 100 corporations have signed on with a program that pushes their companies' views of political candidates to employees via Web sites and interoffice e-mails.

"The Business Industry Political Action Committee's "Prosperity Project" program targets 20 million employees in battleground states. The committee is especially concerned about confirmation of pro-business judges and has focused most of its attention on congressional races."[16]

BIPAC was a sponsor member of the Liberty Alliance, a group "committed to developing an open standard for federated network identity that supports all current and emerging network devices."[26][27]

Ties to the Tobacco Industry

According to documents archived in the Legacy Tobacco Documents Library, at least up to 1998 BIPAC representatives worked with tobacco industry groups[28] and sought and received funding from the tobacco industry, including companies like RJ Reynolds[29] and the trade group the Tobacco Institute.[30]

BIPAC's ties to the tobacco industry appear date back close to its founding. Minutes from a 1964 Tobacco Institute meeting report that board members heard a presentation about BIPAC,[31] and BIPAC's first national advisory board included the president of Bloch Brothers Tobacco Company.[32] A 1966 memo from Tobacco Institute's Edward Ragland to Senator Earle Clements listed BIPAC (then operated by the National Association of Manufacturers) among organizations that were "sympathetic to our problems and willing to lend their support to us where the problem of further govermental controls over industry exists."[33]

See the TobaccoWiki for more information on the tobacco industry. 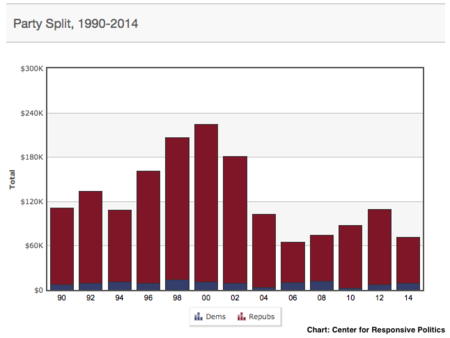 While BIPAC is primarily focused on helping companies influence their employees' voting and political activities, it does also engage in activities traditionally associated with political action committees such as raising money to contribute to political candidates and party committees. BIPAC reported $1,671,049 in contributions between 1990 and 2014, with the majority going to Republicans.[34]

Ties to Fix The Debt

BIPAC is a partner of the Campaign to Fix the Debt,[37] an effort by former Nixon man-turned-Wall Street billionaire Pete Peterson to cut earned benefit programs such as Social Security and Medicare under the guise of fixing the nation's "debt problem." For example, BIPAC worked with Fix the Debt in Pennsylvania.[38] See the Fix the Debt Portal for more information.