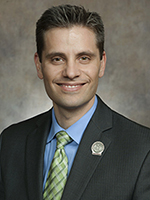 Chris L. Kapenga is a Republican member of the Wisconsin State Senate, who previously represented the 33rd Assembly District and the 99th Assembly District.[1] Kapenga is the owner and president of Integrated Time Systems, an international provider of workforce time management solutions located in Milwaukee.

In the 2012 election, Kapenga vied for the recently vacated 33rd Senate District, losing the primary on November 6, 2012 to Rep. Paul Farrow. Kapenga was reelected to the Assembly (in a new seat after redistricting) on November 6, 2012.

Sen. Kapenga introduced Senate Joint Resolution 18 on March 16, 2017. The resolution calls for a constitutional convention to ratify a balanced budget amendment to the constitution.

Richard Eskow writes of the resolution, "Kapenga’s Senate Joint Resolution 18 calls for a constitutional convention and states that the resolution represents a “continuing application” for a convention. This language is included so the resolution does not have to be renewed, and in hopes of preventing its repeal by future legislatures. Senate Bill 107 states that the GOP-controlled legislature and the governor will appoint seven delegates to the convention, and attempts to provide for the replacement of delegates if they go off-script. Senate Joint Resolution 19 commits the state of Wisconsin to follow a set of convention rules and procedures drafted by the “Assembly of State Legislatures.” Kapenga and friends founded the organization to advance the constitutional convention idea, and that group too has presented at ALEC."[2]

"An austerity amendment would limit the nation’s ability to respond to economic crises, military threats, or natural disasters. Macroeconomic Advisors, a private consulting group, concluded that a balanced budget amendment would “retard economic growth” and would be “catastrophic” during deep recessions. Moreover, the Center for Budget and Policy Priorities (CBPP) found that a balanced budget amendment would endanger Social Security and could result in a number of programs, including Medicare and veterans’ benefits, being cut by more than half. The authors estimated that such an amendment would have led to the loss of 15 million American jobs if it had been in place in 2012," Eskow writes.[2]

Representative Kapenga is a member of the American Legislative Exchange Council (ALEC) and is a legislative member of ALEC's Civil Justice Task Force. In 2010, Rep. Kapenga accepted a $500 donation from ALEC member corporation Alliant Energy.[3]
. In the 2011-2012 legislative session, Rep. Kapenga co-authored 3 bills that reflect ALEC models, according to an analysis by the Center for Media and Democracy.

Through a 2017 open records request with Sen. Kapenga's office, the Center for Media and Democracy received the following documents. In its request, CMD asked for all records that pertain to the American Legislative Exchange Council (ALEC), American City County Exchange (ACCE), and ALEC's new lobbying arm called the Jeffersonian Project.