Class A Biosolids is a designation for dewatered and heated sewage sludge that meets U.S. EPA guidelines for land application with no restrictions. Thus, class A biosolids can be legally used as fertilizer on farms, vegetable gardens, and can be sold to home gardeners as compost or fertilizer. Compared to Class B Biosolids, Class A Biosolids are virtually the same, but with stricter limits on pathogens and "vector attraction" (i.e. class A biosolids must not attract disease-carrying insects or rodents, etc). The EPA claims that Class A biosolids must "contain no detectible levels of pathogens"[1] but the only pathogens actually measured and regulated in the law are fecal coliform and salmonella.[2] Despite the U.S. EPA's assurances of safety,[3], the safety requirements for Class A Biosolids do nothing to regulate or limit the numerous other contaminants routinely found in sewage sludge.

U.S. EPA Standards for Metal Contaminants in Class A Biosolids 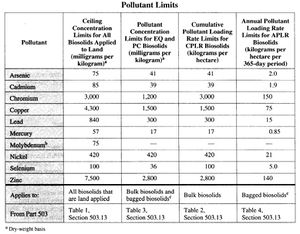 According to the book Advanced Biological Treatment Processes:[5]

"The term Exceptional Quality is often used to describe a biosolids product which meets Class A pathogen reduction requirements, the most stringent metals limits (Pollutant Concentrations), and vector attraction reduction standards specified in the Part 503 Rule. Vectors (flies, mosquitoes, rodents, birds, etc.) can transmit diseases directly to humans or play a specific role in the life cycle of a pathogen as a host. Vector attraction reduction refers to processing which makes the biosolids less attractive to vectors thereby reducing the potential for transmitting diseases."

In 2003, the EPA announced that it would not regulate dioxins in sewage sludge applied to land as fertilizer, even when used on farms and gardens where food is grown. The Natural Resources Defense Council (NRDC) criticized this decision, saying it violates the Clean Water Act.

"Dioxins cause cancer and diabetes, as well as nervous system and hormonal problems," said Nancy Stoner, director of NRDC's Clean Water Project. "And the EPA is required by law to protect the public from toxic pollutants like dioxins. This decision shows the agency under this administration has forgotten its mission."[6]

"EPA traditionally limits public exposure to chemicals if they pose a cancer risk of one per 1 million Americans," Stoner explained. "But the risk is 1 in 10,000 from the dioxins we already have in our bodies. And cancer isn't the only problem. The EPA itself has said that the non-cancer risks of dioxins are so high that it can't even calculate a 'safe' or acceptable level of exposure. To us that says EPA should keep dioxins out of our food, and that means, among other things, regulating sewage sludge."[7]

NRDC called on the EPA to do the following: