Columbia University "was founded in 1754 as King's College by royal charter of King George II of England. It is the oldest institution of higher learning in the state of New York and the fifth oldest in the United States...

"The American Revolution brought the growth of the college to a halt, forcing a suspension of instruction in 1776 that lasted for eight years. However, the institution continued to exert a significant influence on American life through the people associated with it. Among the earliest students and trustees of King's College were John Jay, the first chief justice of the United States; Alexander Hamilton, the first secretary of the treasury; Gouverneur Morris, the author of the final draft of the U.S. Constitution; and Robert R. Livingston, a member of the five-man committee that drafted the Declaration of Independence.

"During the presidency of Nicholas Murray Butler (1902–1945), Columbia emerged as a preeminent national center for educational innovation and scholarly achievement. The School of Journalism was established by bequest of Joseph Pulitzer in 1912. John Erskine taught the first Great Books Honors Seminar at Columbia College in 1919, making the study of original masterworks the foundation of undergraduate education, and in the same year, a course on war and peace studies originated the College's influential Core Curriculum." [1]

In 2003, a People for the Ethical Treatment of Animals (PETA) investigation into Columbia University revealed a lack of basic veterinary care for monkeys and baboons. Sick and dying animals were simply left in their cages without care or painkillers after surgical procedures. The studies involving these animals did not even purport to have any scientific usefulness or validity. Topics under scientific investigation included: effects of stress on menstruation and effects of massive doses of cocaine and nicotine on pregnant monkeys. [3] Columbia psychiatrist Suzette Evans receives $500,000 per year in government grants to study the effects of cocaine and heroin on the menstrual cycles of monkeys. Her "experiments" involve the use of cruel and stressful restraint chairs as well as injections and blood draws. Columbia also uses more than 250 dogs per year for "painful and distressing tests".[4]

Cruelty to Puppies Detailed by a Whistleblower at Columbia University 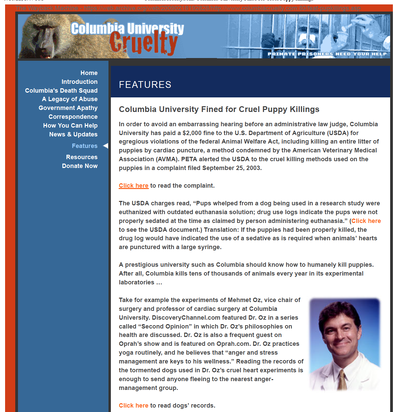 In 2004, complaints about Dr. Mehmet Oz’s dog experiments were cited in a report from an internal investigation into allegations of poor animal care made by Dr. Catherine Dell’Orto, a post-doctoral veterinarian. [5] See also individual reports of Dr. Oz's dog experiments. [6]

According to the report, in Dr. Oz's lab at Columbia University "highly invasive and stressful experiments" on dogs were performed without a "humane end point." [7]

The Animal Welfare Act violations detailed in the reported included a litter of whelped puppies killed by painful cardiac injection:

"The screams of these puppies could be heard through closed doors. All of these puppies, lying in a plastic garbage bag, were killed in the presence of their litter mates."[8]

Subsequent applications for grants to the National Institutes of Health (NIH) by Dr. Oz have been denied.[9] In 2004, Columbia paid $2,000 in fines to the USDA. [9]