The Council of State Chambers (COSC) is a little known 501(c)(6) organization[1] that helps the top lobbyists for state chambers of commerce get on message about the national political agenda of the U.S. Chamber of Commerce, one of the largest and most influential lobbying forces in America. It works closely with the U.S. Chamber of Commerce, which is a member along with most state chambers.[2] In 2016, the Center for Media and Democracy released COSC's poll of the nation's top executives that showed that they supported raising the minimum wage, paid sick days, predictive scheduling, maternity and paternity leave and other progressive policies (see below.) These findings were reported in the Washington Post and dozens of other top news outlets (see below.)

According to its website "The Council of State Chambers (COSC) is the national organization for state chamber CEOs and their executive leadership. The purpose of COSC is to promote cooperation among state chambers of commerce, strengthen existing state chambers, and promote the extensions of the state chamber of commerce movement throughout the country."[3] The group is part of a powerful network of organizations that serve, effectively, as arms of the U.S Chamber.

The staff listed on the COSC website actually work for the lobbying group MultiState Associates Incorporated,[4] which specializes in state and local lobbying and state-based legislative tracking.[5] "With offices throughout the country and a network of over 2,000 lobbyists in every state capital, major city and U.S. territory, MultiState is well represented and poised for action."[2]

For more information about the U.S. Chamber of Commerce and its affiliated organizations view the Sourcewatch page here.

Luntz Global Poll of Executives and CEOs Exposed in 2016

Exposed by CMD: The Chambers of Commerce

On April 4, 2016 the Center for Media and Democracy, publisher of Sourcewatch.org, released documents that it obtained from a top GOP polling firm, Luntz Global, which show widespread support from the Chamber's members for policies such as an increase in the minimum wage, paid sick leave, paid paternity and paid maternity leave.

"This webinar reveals just how deeply corporate interests and their lobbyists are influencing the priorities of state Chambers of Commerce, even when that agenda contradicts the opinions of their local business members," said Lisa Graves, executive director of the Center for Media and Democracy. "Rather than listening to its members and crafting a policy agenda that reflects their priorities, Chamber lobbyists pick their policy positions behind closed doors and then figure out how to convince their members to fall in line." She added, "It's a warped, undemocratic process, and the Chambers should be held accountable for their claims to the public, press, and elected officials that businesses oppose raising the minimum wage, paid sick leave, increased family and medical leave and other common sense policies, when in fact substantial majorities of business executives actually support these public policies."[7]

Luntz Global is a prominent GOP polling and communications firm headed by Frank Luntz. Its website states: "Our analysis of the results will help you learn exactly what your target audience wants ­and needs to hear."[8] 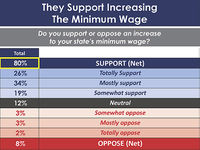 When asked during the webinar about these surprising results, Merritt said, "it is undeniable that they support an increase" in the minimum wage. "My guess is that they are looking at raising it as a priority... If you are fighting a minimum wage increase, you are fighting an uphill battle." He continued, "most Americans support it, most Republicans support it... A winning argument is to put it up against other issues where it drops as a priority," advised Merritt. "In isolation it is definitely a winner."[2] 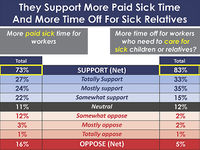 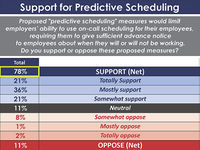 On predictive scheduling, CEOs support it 78 percent to 11 percent.

Predictive scheduling measures would limit employers' ability to use on-call scheduling for their employees, requiring them to give sufficient advance notice to their employees about when they will and will not be working.

"On-call" scheduling practices at fast food restaurants and chain stores that do not allow employees to plan for the care of their children have recently come to public attention, prompting San Francisco to pass one of the nation's first ordinances to address the problem in 2015. Already industry is talking about preempting such ordinances in certain states.[2]

State Chambers along with the American Legislative Exchange Council (ALEC) have been pushing preemption of living wage, minimum wage, prevailing wage, and other progressive policies promulgated by localities for some time.[10] Multistate Associates has been supportive of these state preemption efforts.

In the Luntz Global poll CEOs were asked: "All of these issues may be important but when it comes to where an elected official stands, which issue is the MOST important to you?"

"State preemption of local mandates" was at the bottom of the list at 10 percent.

Of those who said "state preemption of local mandates are most important," only 18 percent, the smallest number, were worried about "ensuring local governments do not overly burden businesses when it comes to wages and benefits."[2]

On energy, attendees are regularly briefed by Karen Harbert, the president of the U.S. Chamber's "Institute for 21st Century Energy."[11] Harbert and the "Institute" she presides over have long advocated for deregulating fracking, expanding offshore oil drilling in U.S. coastal waters, rejecting the Obama administration's Clean Power Plan, and vastly increasing coal and nuclear energy production.

On international trade issues, attendees hear from the likes of Christopher Wenk, the "Director of International Policy" at the U.S. Chamber,[12] on why local and state chambers should lobby lawmakers to pass "free trade" agreements like the TPP and TTIP.

On labor issues, Glenn Spencer of the U.S. Chamber's "Workforce Freedom Initiative"[13] regularly leads panel discussions. Spencer formerly worked for David Koch's Citizens for a Sound Economy operation (the predecessor of Kochs' Americans for Prosperity and also the FreedomWorks entities) and the National Republican Senatorial Committee. His briefings are anti-union.

Conferences end with a "political workshop" highlighting the U.S. Chamber's latest approaches to effective electioneering. In one conference agenda's description, "Getting actively engaged in politics is the new frontier for chambers for a simple reason: it's easier to elect officials who understand your concerns than to convince officials who fundamentally disagree with you"[14]

Past COSC conferences have included trainings led by representatives from the American Legislative Exchange Council (ALEC), mega-corporations like Walmart, and the U.S. Chamber of Commerce. Also on the agenda was a 2016 political discussion led by the Koch-founded Freedom Partners organization, and a session led by a PR firm "on how best to message a free market approach to climate issues." COSC's conferences and webinars, coupled with the U.S. Chamber's avenues of influence, appear to have a substantive impact on state chambers' lobbying and policy positions.[14]

According to the group's 2014 IRS 990 filing there are 12 voting members on the governing body.

Board as of 2014; none of the following board members reported compensation from the organization in that year.[1]