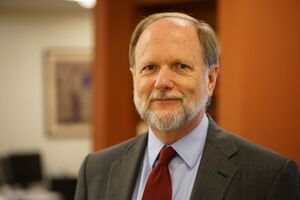 David Keating is the current president of the Institute for Free Speech (formerly known as the Center for Competitive Politics) .[1] He is the former executive director of the dark money group Club for Growth, has served on the Board of Directors of the National Taxpayers Union.[2]Keating played a key role in the development and passage of Taxpayers' Bill of Rights, a concept advocated by conservative and libertarian groups as a way of limiting the growth of government.[3][4] Keating is the "longtime conservative activist" who was "the architect of a federal lawsuit that ended in a landmark 2010 court ruling that reshaped the way elections are run" as the inventor of the super PAC.[5]

As the president of the Institute for Free Speech (IFS), Keating often argues against stricter campaign finance regulations and against calls for more donor transparency.[6] But many of the funders to his Institute -- the Koch-tied DonorsTrust, the Bradley Foundation, the DeVos family -- are linked to groups which oppose transparency efforts.

Keating provided testimony at the February 14, 2019, House Committee on Administration hearing on the H.R. 1, which is aimed at ensuring voting rights, eliminating partisan gerrymandering, strengthening ethics systems for all three branches of government, and reforming the campaign finance system. Keating provided testimony that H.R. 1 “hurts the not-profit groups working for social change and a better America." He went on to say that it will harm the free speech rights of average Americans, “virtually any organization that has contacted your office will be affected by this bill." Keating went on to liken the needs of big money spenders to the gay rights movement not wanting to have their members disclosed.[7]

At that point, Rep. Jamie Raskin of Maryland had had enough. He interrupted to ask: “Because the corporations have no sexual orientation would you agree that corporations should be required to disclose their money? If you look at Citizens United we are actually talking about for business corporations here.”[8]

A trove of emails was published by the Guardian which laid "bare [the] pervasive influence of corporate cash on modern US elections." Prosecutors in the court case from like the emailed were leaked alleged: “contributions were personally solicited by Governor Scott Walker to WCfG Wisconsin Club for Growth ... in order to circumvent the reporting and contributions provisions of Wisconsin statutes."[9] WCfG is a state arm of Keating's former organization, Club for Growth. Emails show Keating contacted R.J. Johnson of WCfG to express concern on the group's action's legality: "since our brand name is at stake from any errors by state groups, there are times such as today when we want complete assurance about activities that might be under consideration."

"The most influential political activists you’ve never heard of"

Time Magazine calls Keating "mastermind behind the super PAC" and says he has no regrets about it. Keating says, "it’s totally obvious when you think about it” that people are using super PACs to specifically to promote a candidate, but it “just never entered" his mind." Critics say that super PACS "invited an avalanche of outside spending that gives the wealthy outsize influence and makes a mockery of the limits established by the FEC," but "Keating celebrates such changes."[5]

The right-wing's headhunting firm Talent Market placed Keating in his role at the Institute for Free Speech, according to internal documents from the Bradley Foundation. The firm "has helped place over 270 leaders, fundraisers, and lawyers at more than 160 right-wing think tanks, media groups and advocacy organizations nationwide. Talent Market also acts as a consultant to the right-wing on 'strategies for retaining top talent, including role changes, performance reviews, incentive programs and training,' (DonorsTrust, Grant Proposal Record, 6/2/2015)."[10] Talent Market is a limited liability company (LLC) owned by DonorsTrust, a donor advised fund favored by the billionaire Koch network of ultra-wealthy right-wingers for its easy cloaking of donations to political allies. It was founded in 2009 by former President and CEO of DonorsTrust Whitney Ball, President of the State Policy Network (SPN) Tracie Sharp, and Talent Market Executive Director Claire Kittle Dixon.[10]