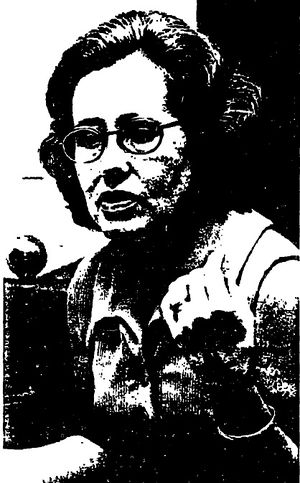 Donna Shimp was the plaintiff in the 1976 case of Shimp v. New Jersey Bell Telephone Company. The case received national attention as a precedent-setting case; it was the first to show that employees have a right to be free from the dangers of secondhand tobacco smoke in their workplaces. In the case, the New Jersey Superior Court ruled that under common law, Donna Shimp had a right to a safe workplace, that because secondhand smoke from cigarettes was harmful to her health, that her place of business had to restrict smoking in many areas. This case increased public awareness of the danger of secondhand smoke and set a precedent for other employers in New Jersey and elsewhere to provide smoke-free work areas.[1]

In the 1970’s, Donna Shimp was a Bell Telephone Copany employee of 15 years’ standing, with a good record. She suffered severe allergic reactions even to low concentrations of tobacco smoke. Shimp tolerated her situation until she was transferred to a poorly ventilated office where seven out of the 13 employees who shared the room were heavy smokers. After a series of formal complaints to management, she was offered a job switch that involved a demotion and lower pay. Ms. Shimp refused to accept the offer, which she considered to be a penalty. After exhausting all remaining grievance procedures, she launched a lawsuit against her employer in the New Jersey Superior Court.

The Court ordered Bell Telephone to provide Ms. Shimp with safe working conditions, specifically by prohibiting smoking in its offices and customer service areas. A key factor in persuading the judge to rule in Ms. Shimp’s favor was that the telephone company had prohibited smoking near some of its sophisticated equipment. The judge said, "If such rules are established for machines, I see no reason why they should not be held in force for humans." What made the ruling so significant is that it was based not primarily on Ms. Shimps allergy, but on common law principles applicable to nonsmokers in general. The judge stated,

It is clearly the law in this state that an employee has a right to work in a safe environment. An employer is under an affirmative duty to provide a work area that is free from unsafe conditions. The evidence is clear and overwhelming. Cigarette smoke contaminates and pollutes the air, creating a health hazard not merely to the smoker but to all those around him/her who must rely upon the same air supply ... The right of an individual to risk his or her health does not include the right to jeopardize the health of those who must remain around him or her in order to properly perform the duties of their jobs.

The judgment became a legal landmark in North America.[2]