E.ON UK describes itself as "one of the UK’s leading integrated power and gas companies – generating and distributing electricity, and retailing power and gas – and are part of the E.ON group, the world's largest investor-owned power and gas company."[1] It generates approximately 10% of the United Kingdom's electricity. The World Coal Institute lists E.ON UK as having 4.9 gigawatts of coal-fired power generation assets in 2005.[2].

On its website, E.ON UK states that a part of its corporate social responsibility program includes "Working towards low carbon energy" with the company stating that it will "produce and deliver energy to our customers, whilst reducing our carbon intensity."[3] It also states on its website that "we recognise the environmental impact of our business. We know that Climate Change is an important issue for society."[4]

On its website E.ON UK states that in 2006 carbon dioxide emissions from its generation plants totaled 27.6 million tonnes.[5] 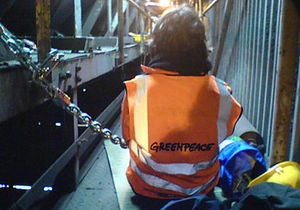 A Greenpeace activist chains herself to the coal conveyor belt at the Kingsnorth Power Plant near Kent, England.

On October 8, 2007, 50 Greenpeace UK activists occupied the Kingsnorth Power Station near Kent, England. One team of people shut down the conveyor belts carrying coal into the plant, and then chained themselves to the machinery. Another team scaled the plant's chimney, upon which they painted the phrase "Gordon Bit It." Greenpeace held the action in protests of plans by the plant's owners, E.ON, to build two new coal-fired plants at the site - which would be the first coal-fired power plants built in the UK in 20 years. Police arrested 18 people during the action.[9][10] 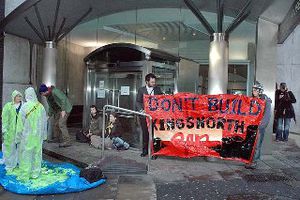 On April 1, 2008, as part of the Fossil Fools International Day of Action, 30 activists with Eastside Climate Action blockaded the front entrance of E.ON's headquarters in Nottingham, England. Two people used U-locks to lock themselves to the front door, while others blockaded the back entrance; other protestors poured green paint on themselves, to simulate E.ON's "greenwashing". The action was in protest of E.ON's plans to build the Kingsnorth coal-fired power plant - the first new coal plant in the UK in 50 years. Police made two arrests, and the building was shut down for the day.[11][12]

In full view of security cameras, a single activist climbed two 10-foot, razor-wired and electrified security fences at E.ON's coal-fired power plant and crashed a huge 500MW turbine, leaving behind a banner that read "no new coal." All power from the plant was down for four hours, which cut the UK's CO2 emissions by an estimated 2 percent. Police are still searching for the activist.[13]

Police carried out what may be the largest preemptive strike on environmental activism in British history. 114 people were arrested for planning a direct action at a coal-fired power station, believed to be E.ON's Ratcliff-on-Soar plant. Caroline Lucas, leader of the Green party, said, "confidence in policing of protests like this has just about hit rock bottom. Peaceful protest is a civil liberty we need to be upheld, even more in the context of the lack of government action on climate change. We have tried all the usual channels." The alleged activists were charged with conspiracy to commit criminal damage and aggravated trespass.

E.ON confirmed that the Ratcliff plant was the intended target. No group claimed responsibility for the alleged protest. Although no details of the proposed action were available, veteran activists suggested that demonstrators may have planned to chain themselves to conveyor belts transporting coal into the power plant. The tactic has been used at both Ratcliffe and the Kingsnorth Power Station, also owned by E.ON UK.[14]

Ten Greenpeace activists boarded a ship delivering coal to the Kingsnorth Power Station. The group used inflatable speedboats to target the boat as it sailed up the River Medway. All 10 protesters were arrested and charged with conspiring to commit criminal damage and having an unauthorized presence on a ship.[15]

In February PR Week reported that "E.ON is calling in PR support as it gears up for a David versus Goliath battle with environmental campaigners over a controversial new power station." PR Week's Clare O'Connor noted that the brief would include crisis communications.[16] The electricity utility's quest for PR support followed documents obtained by Greenpeace UK revealed company's determination to get the government's approval for a new coal-fired power station.[17]

The documents, which were obtained under the Freedom of Information Act, Greenpeace reported, included one in which E.ON insisted that John Hutton "has no right to withhold approval" of the proposed new coal plant. "E.on also tells the government not to include carbon capture and storage in their conditions for building the new coal plant. It took the government just six minutes to reply: 'Thanks. I won’t include.” Just like that ... In the same email, E.on admits that carbon capture doesn’t exist (or, in their words, it 'has no current reference for viability at any scale'), exposing the government’s energy policy and E.on's media strategy – based on a faith in the potential of carbon capture technology to deliver 'clean coal' – as hollow."[17]

The following month, PR Week reported that E.ON had hired the PR firm Edelman "as the energy giant looks to develop its nuclear portfolio and counter opposition from green campaigners." E.ON UK's head of PR, Jonathan Smith, told PR Week that "Edelman will offer us support lobbying the Government and political audiences ... It will also carry out an information programme, getting the message across about the urgency to replace generation capacity. We also have plans for new nuclear stations. Edelman will be involved in work for the upcoming white papers."[18]

The World Development Movement's media officer, Kate Blagojevic, commented on Edelman's role that "it's clear that E.ON have called in the big guns and are preparing themselves for a PR battle to win the hearts and minds of the British public. So brace yourselves, in the coming months, you can expect to be inundated with headlines extolling the virtues of: 'Carbon Capture and Storage', 'Clean Coal', 'Energy efficient E.ON'. Claims which are unproven, implausable and in some cases, impossible."[19]

In April 2008, PR Week reported that E.ON had "consolidated its consumer and trade PR activity into one agency with the appointment of The Red Consultancy". PR Week reported that "The Red Consultancy had previously held the consumer PR account, while Target PR handled the brand's B2B activity and Leeds-based Mortimer Chadwick Grey handled part of its consumer work. The Red Consultancy will now handle all aspects of the brand's PR activity." The PR firm's account team will include Ed Staples and Paul Davies "and report into E.ON retail PR manager Nick Sandham."[20]