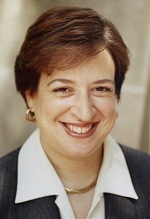 Elena Kagan, J.D. is currently serving as Solicitor General for the Obama Administration. She is the first woman ever to hold the position. As of May 10, 2010, she became President Obama's second nominee to the Supreme Court.

Elena Kagan was born April 28, 1960. She grew up in Manhattan on the Upper West side. She attended Princeton University for her undergraduate education. There she received an A.V. in History before matriculating to Oxford University on a Sachs scholarship. After receiving her Masters in Philosophy, she then attended Harvard Law School where she made the Law Review. Upon receiving her J.D, she went on to clerk for Abner Mikva on the D.C. Circuit of the U.S. Court of Appeals. Following the end of that clerkship, she then clerked for U.S. Supreme Court Justice Thurgood Marshall.

After completing her clerkship with Justice Marshal, Kagan worked on Michael Dukakis' 1988 presidential campaign. She then went to work for the D.C law firm William and Connolly. After 2 years, she entered into the field of academia as a an assistant professor at the University of Chicago. Four years after she gained tenure but left to work in the Clinton administration.

She is a former Dean of Harvard Law School.

Nomination to the Supreme Court

President Obama nominated Kagan to the Supreme Court on May 10, 2010. If confirmed, Kagan would be the fourth female supreme court justice. She is the second woman that President Obama has nominated to the bench. The confirmation hearings are set to begin on June 28, 2010.