Emanuele Ottolenghi is a senior fellow at the Foundation for the Defense of Democracies, a regular contributor with Commentary Magazine, and the former executive director of The Transatlantic Institute (appointed 28 August 2006), 'an American Jewish Committee initiative of international diplomacy'.[1][2] He has written op-eds for the National Review, New York Sun, Jerusalem Post (regular contributor), the Guardian, among others, most of which are focused on Israel, and its policy initiatives. 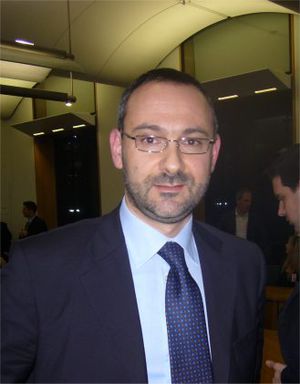 Emanuele Ottolenghi at the House of Commons, London, at the Henry Jackson Society event, 6 February 2008.

Emanuele Ottolenghi was born in 1969 in Bologna, Italy, and he speaks English, French, Hebrew and Italian. He graduated from the University of Bologna with a degree in Political Science. He lived for five years in Israel, where he worked for the Israel Democracy Institute, and obtained a PhD in Political Science from the Hebrew University of Jerusalem. Around 2003, he taught Israeli politics at Oxford University where he was the Leone Ginzburg Fellow in Israel Studies at the Oxford Centre for Hebrew and Jewish Studies and the Middle East Centre at St Antony's College, Oxford. He was also a columnist for Il Foglio. He has held positions at the American Enterprise Institute in Washington, D.C., as well as the University of New South Wales, in Australia.

From the Magna Carta Foundation:

He works as a freelance consultant on Israeli politics and Middle East issues; he regularly contributes Op-Eds to Israel’s English daily The Jerusalem Post, the Italian Daily Il Foglio and occasionally to the Italian daily syndicate Il Quotidiano Nazionale (a conglomerate of Il Giorno, Il Resto del Carlino, and La Nazione); Fragments of Zion, his monthly column in Rome’s Jewish magazine Shalom, is dedicated to Zionist thinkers and the relevance of their work to present day Israel. He has published Op-Eds in several newspapers on Israel and the Middle East topics (The Guardian, The Jerusalem Report, The Australian Financial Review and Newsday among others) and regularly appears on news radio and TV programs.

The Magna Carta Foundation is an Italian neoconservative think tank inspired by the American tradition.[3]

Ottolenghi is a leading voice in the neoconservative campaign against Iran, and a Google search indicates that he publishes several articles per month against Iran. Ottolenghi lobbies parliamentarians to obtain support in favor of an attack or sanctions against Iran. He has appeared twice at the UK House of Commons invited by the Henry Jackson Society (HJS)[4], and on both occasions he pushed for an attack/sanctions against Iran. His first HJS event coincided with the NIE findings showing that American intelligence analysts had a consensus opinion that Iran had no nuclear weapons program. Ottolenghi spent much time suggesting that the NIE findings were not relevant or were unreliable.

Over the past five years Ottolenghi has tried to establish himself as an expert on Iran, with a view to encouraging a more belligerent policy toward the Islamic Republic. Ottolenghi is now a member of The Iran Energy Project, an initiative of the Foundation for Defense of Democracies. He has argued for the economic strangulation of Iran, and in a recent article in Foreign Affairs, he makes the case that the bar of evidence must be set lower to blacklist companies suspected of doing business with Iran's Revolutionary Guards. He writes:

If a business thought to be IRGC-related is publicly identified, government agencies can better investigate its identity and operations. This may then lead to a designation by one or more Western governments. Even if a business is not designated as IRGC-affiliated, however, the mere act of identification is useful.[5]

Many of the articles below appear in multiple journals. Even if it appears in the WSJ, it is also likely to be posted on The National Post (Canada), etc. These articles are efficiently syndicated. Only one source is provided below. This is not an exhaustive list.

Until 2006 Ottolenghi maintained his own website www.emanueleottolenghi.com, but since he became director of the TransAtlantic institute it has been removed. The last version of it is available in the Internet Archive of 24 August 2006.[9]