The Enterprise Freedom Action Committee (EFAC) is a right-wing organization that has opposed Democrats running for political office,[1] and which is a creation of one of Washington's acknowledged masters of AstroTurf and stealth tactics: lobbyist and front man Richard Berman.[2] Berman's company, Berman & Co., represents the restaurant, alcoholic beverage and tobacco industries. EFAC also operates under the name Committee to Rethink Reform.[3]

Marcus Owens, a former director of the exempt organizations department at the IRS, said in an interview that Berman’s “web of organizations clearly, in my view, is operating for his private benefit and for the private benefit of his clients.” That’s “a clear violation of the requirements for tax-exempt status.” [5].

“This mess of Berman and his empire of non-profits has gone on for too long,” added Frances Hill, a professor of law at the University of Miami and author of “Taxation of Exempt Entities.” Hill told Bloomberg reporters Mark Drajem and Brian Wingfield it “seems like an appalling abuse of tax-exempt status.” [6]

Berman, who reportedly embraces his nickname, Dr. Evil, has set up and maintained numerous astroturf non-profits. Groups that he runs include the Center for Consumer Freedom and the American Beverage Institute [7]. The Center for Consumer Freedom was established with an initial $600,000 from the tobacco company Phillip Morris and advocates on behalf of restaurant chains and food and beverage companies against nutritional critics and government regulations. The American Beverage Institute has fought against drunk-driving checkpoints. Berman's organization have also attacked the Humane Society

A November 1, 2012 article in Bloomberg shows CCF in the following chart of non-profits created by Berman & Co. at the center of an IRS complaint filed in 2012 (used with permission): 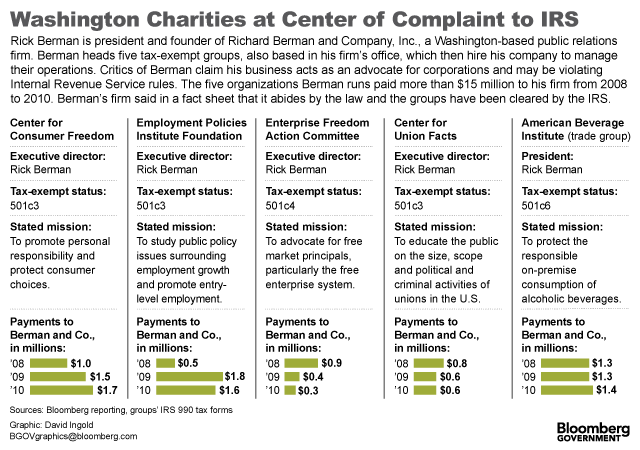 Richard Berman is the President and Executive Director of EFAC, according to its tax filings, and also holds the books for the nonprofit. In 2013 EFAC also paid his PR firm, Berman & Co., $301,689 for management and other fees, while compensating Berman $9,375 for his executive role.