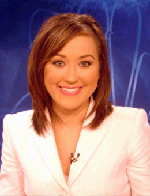 Eva Pilgrim is a morning news anchor with WVVA-6 television station in West Virginia. She joined WVVA in November 2004 as a reporter in the Beckley Bureau and became news anchor in March 2005. [1]

A biographical note states that she "began her career in broadcasting as a web producer for WIS-TV in Columbia, South Carolina. She attended the University of South Carolina." [2]