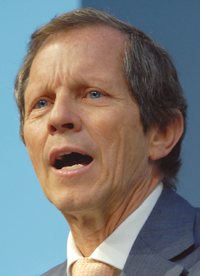 Giovanni Bisignani is the director general and chief executive of the International Air Transport Association, a position he has held since June 2002.[1]

A biographical note states that "prior to joining IATA, Mr Bisignani launched and directed Opodo – the first European airline-owned online travel agency. His airline experience includes 5 years at the helm of Alitalia as CEO and Managing Director, during which time he also served on the IATA Executive Committee and was Chairman of the AEA (Association of European Airlines). He has been a Member of Pratt & Whitney Advisory Board and Chairman of the global distribution services provider Galileo International. Today he is a Board Member of NATS Holdings Ltd, provider of air traffic services in the United Kingdom."[1]

It also states that he "has held various high-level responsibilities at the energy company ENI and the Italian industrial conglomerate IRI Group. He served as President of Tirrenia di Navigazione, the largest Italian ferry company and as CEO & Managing Director of SM Logistics, a group of logistics and freight forwarding companies, partially-owned by GE Capital."[1]

In a 2007 opinion column on global warming, Bisignani insisted that the contribution of aviation to global warming had "remained largely unchanged over the last two decades, despite the growth of air traffic." Even with projections to 2050 indicating that the sectors share would double he insisted that "we are and will remain a small part of the big problem of climate change" while simultaneously conceding that such rapid growth in emissions "is politically unacceptable for any industry."[2]

Faced with opposition from ICAO and other airline groups to the inclusion of international aviation in am emissions trading scheme, the European Union has moved to impose impose a levy on emissions on flights operating with the region. It is also advocating that international aviation emissions be included in any new agreement that supersedes the Kyoto Protocol. However Bisignani has objected to calls for the aviation industry to curb its emissions and pay for its carbon emissions. "The solution is not to return to the days when flying was reserved for the well-to-do by making it artificially expensive with even more taxes. Punitive economic measures like emissions trading will not have a big impact on aviation's environmental performance,"he wrote.[2]

Instead, Bisignani argues that regulators should place their faith in potential efficiency gains and providing "tax credits to encourage faster re-fleeting or grants to fund alternative fuel research." Instead of imposing the costs of carbon on airlines, Bisignani argued that "the only way to zero emissions" is "to build better planes and more efficient engines powered by non-carbon sources." Governments, he argued should focus on improving "air traffic management and eliminate unnecessary fuel burn" and the development of efficiency "technology targets in a roadmap".[2]