From SourceWatch
(Redirected from Hezbollah)
Jump to navigation Jump to search 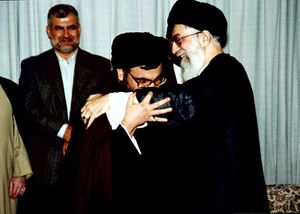 The head of Hezbollah on the left kisses the arm of Imam Khamenei.

Hizballah, also Hezbollah or Hizbullah is a Shi'a political organization based in Lebanon. It was founded in 1982 in response to the Israeli invasion of Southern Lebanon, and has a significant paramilitary wing. It has variously been described as an agent of legitimate resistance in Lebanon, or as a terrorist group. Hizballah provides social services in Southern Lebanon, including the provision of schools and hospitals,[1] to a population that consists mainly of Lebanese Shi'a and Palestinian refugees.

It is a major player in Lebanese politics, having won 27% of Parliamentary seats in the Lebanese elections of 2005.