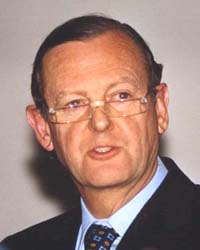 Hugh Morgan is a Member of the Board of the Reserve Bank of Australia. He was the CEO of Western Mining Corporation from 1990 to 2003, and the President of the Business Council of Australia from 2003 to 2005 [1] and is a Director of the Australian Davos Connection.

Morgan was one of the orginal funders of the Centre for Independent Studies and helped to establish the HR Nicholls Society. He has also funded the Institute of Public Affairs, sits on the board of governors for the Committee for Economic Development of Australia, and is on the Asialink Council. Morgan was also a member of the secretive neoliberal Crossroads group, which met during the early 1980s. He is a known climate change sceptic, and opponent of the Kyoto Protocol.

In 1997 "it was revealed that Western Mining Corporation had quadrupled its forward gold sales at the same time the RBA was planning to sell two thirds of its gold reserves. WMC's CEO, Hugh Morgan, was a member of the board at the time. He did not, and was not required to, absent himself from the board discussions which dealt with the gold sales." [2]

"As the CEO of Western Mining and a member of the Business Council of Australia, Morgan's anti-greenhouse activism reached extreme levels. He was influential in the Australian Aluminium Council and was responsible for establishing the greenhouse sceptics collected together in the Lavoisier Group. He described the AGO's four discussion papers on emissions trading as "Mein Kampf declarations" and has railed against the Kyoto Protocol as a devious plot by European bureaucrats to seize control of the Australian economy. Despite these extraordinary views Morgan has enjoyed unparalleled access to the Prime Minister." [3]