The International Air Transport Association (IATA) is a an international aviation industry lobby group which, it states on its website, "represents some 230 airlines comprising 93% of scheduled international air traffic".[1]

In a 2006 document opposing aviation being included in the European Union's emissions trading scheme, IATA's CEO, Giovanni Bisignani, claimed that "air transport is an environmentally-responsible industry. No other industry has matched our achievements and investments in quieter and cleaner technology. Air transport contributes to the stabilisation of greenhouse gas emissions in the atmosphere by continuously increasing fuel and carbon efficiency."[2]

On its website IATA seeks to downplay the significance of the airline industry's contribution to global warming. It states that "aviation is responsible for: 2% of global carbon dioxide (CO2) emissions; 12% of CO2 emissions from all transport sources, compared to 74% from road transport; 3% of the total man-made contribution to climate change."[3]

"By 2020, airlines are aiming for at least an additional 25% improvement in fuel efficiency and CO2 emissions, through technology and operational enhancements," it states.[3] "New aircraft," IATA boats, "are 70% more fuel efficient than 40 years ago and 20% better than 10 years ago."[4]

Opposition to Including Aviation in Emissions Trading Schemes

Faced with opposition from ICAO and other airline groups to the inclusion of international aviation in am emissions trading scheme, the European Union has moved to impose impose a levy on emissions on flights operating with the region. It is also advocating that international aviation emissions be included in any new agreement that supersedes the Kyoto Protocol. However Bisignani has objected to calls for the aviation industry to curb its emissions and pay for its carbon emissions. "The solution is not to return to the days when flying was reserved for the well-to-do by making it artificially expensive with even more taxes. Punitive economic measures like emissions trading will not have a big impact on aviation's environmental performance,"he wrote.[5]

In December 2005 the Board of Governors of IATA adopted a minimalist position on its role in countering global warming. For IATA, the centrepiece of its policy is opposition to any fuel or greenhouse gas taxes or charges. Taxes or charges, IATA claimed, "undermine socio-economic benefits from aviation, especially in developing economies" and make "t more difficult for them [airlines] to invest in newer, cleaner equipment." IATA's preference was for a voluntary scheme or, if this was rejected, the inclusion of aviation in an emissions trading scheme but only is major exemptions were provided.[2]

IATA's Board of Governors stated that, if states did adopt an emissions trading scheme including aviation, some of the "essential elements" were that:[2]

costs and to accommodate future demand."

In a September 2008 speech at an Australian aviation industry conference, Bisignani complained that the UK government "supports Europe’s rush to unilaterally and illegally bring aviation into its Emissions Trading Scheme (ETS) with an escalating cost starting at EUR 3.5 billion in 2012. While Europe rushes to charge for emissions it is slow to help airlines reduce emissions. Instead of a Single European Sky that could save 16 million tonnes of CO2 each year we get decades of talks, hot air, and more talks."[6]

"What right does Europe have, for example, to tax an Australian plane flying from Asia to Europe for emissions over Afghanistan? To achieve an internationally coordinated approach, Australia must strongly challenge Europe at ICAO and other international forums," he urged.[6] He also said that the Australian government "must also re-examine" the draft Carbon Pollution Emissions Reduction Scheme, an emission trading scheme. "The approach is blunt and focused only on economic measures. Where are the plans for operational efficiencies? As an international observer, I see some big concerns in the proposed economic mechanism. Auctioning permits would set a very bad precedent. And while airlines have been good at limiting our emissions with constant efficiency improvements, carbon-intense industries with less impressive records are given breaks that airlines are not. Why punish the good?", he said.[6]

Gearing up or Copenhagen

As negotiations progressed ahead of the COP15 conference, there was growing criticism of IATA and ICAO's lack of action since the finalisation of the Kyoto Protocol. In June 2009, IATA airlines adopted a bolder sounding negotiating proposal. In it, IATA stated that it supported:[7]

Just weeks ahead of the COP15 conference in Copenhagen, Bisignani wrote in an IATA newsletter: "How to make Copenhagen a success? Our message must be heard far more broadly. Ministers of transport know our story but they are not driving the agenda. Heads of state and environment ministers are the target audience. IATA cannot be the lone campaigner. I need your help to ensure that our industry’s track record, vision and commitment are known by every UNFCCC delegate. Our industry’s future depends on your action and I am confident I can rely on your support."[8]

IATA's has a three-pronged PR strategy for defusing concern over its environmental impact. Firstly, it promotes increased fuel efficiency as the benchmark by which the industry should be judged against. Secondly, it promotes some member companies participation in offering passengers the option of funding a carbon offset program. Finally, one of its key lobbying aims in 2009 was to "secure the support" of International Civil Aviation Organization and its Group on International Aviation and Climate Change to support "the IATA four-pillar strategy and opposition to environmental taxation."[9] IATA's "four-pillar strategy" consists of "investing in technology", "flying planes effectively", "building efficient infrastructure" and "using positive economic measures."[6] 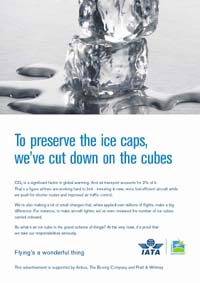 In a bid to sell its environmental credentials to passengers, IATA produced a series of in-flight magazine ads "with the support of Airbus, The Boeing Company, Pratt & Whitney and Rolls-Royce." All of the ads included the variations on the statement that airlines are taking steps "to limit the 2% of carbon emissions attributed to air transport."[10]

Bisignani argues that regulators should place their faith in potential efficiency gains and providing "tax credits to encourage faster re-fleeting or grants to fund alternative fuel research." Instead of imposing the costs of carbon on airlines, Bisignani argued that "the only way to zero emissions" is "to build better planes and more efficient engines powered by non-carbon sources." Governments, he argued should focus on improving "air traffic management and eliminate unnecessary fuel burn" and the development of efficiency "technology targets in a roadmap".[5]

In a 2007 opinion column on global warming, Bisignani insisted that the contribution of aviation to global warming had "remained largely unchanged over the last two decades, despite the growth of air traffic." Even with projections to 2050 indicating that the sectors share would double he insisted that "we are and will remain a small part of the big problem of climate change" while simultaneously conceding that such rapid growth in emissions "is politically unacceptable for any industry."[5]

In a speech in late 2008 Bisignani argued that "the focus must be on global solutions brokered through ICAO. It is the only institution with the technical expertise developed through its Committee on Aviation and Environment Protection. And it is building political momentum with GIACC - the Group on International Aviation and Climate Change."[6]

European Federation for Transport and Environment (T&E), a non-government advocacy group specialising in transport policy, has been critical of IATA's claims about the impact of the contribution of aviation to global warming and the potential effectiveness of its policy proposals. In a 2006 report T&E argued that IATA's claim that aviation contributed only 2% of carbon dioxide emissions dramatically understated the real impact. "In 2000, aviation was responsible for 4 to 9 per cent of the climate change impact of global human activity – the range reflecting uncertainty surrounding the effect of cirrus clouds," T&E and Climate Action Network Europe wrote.[11]

While IATA routinely cites the figure of the aviation industry being responsible for only 2% of carbon dioxide emissions, this is misleading. Concentrating on carbon dioxide emissions only excludes the contribution to global warming from nitogen oxides, contrails and cirrus clouds, which has been calculated to be 2 to 5 times greater than that of CO2 alone.

Further the 2% figure originates from the IPCC's 1999 report Aviation and the Global Atmosphere. In this report, the IPCC explained that the aviation sector contributed 2% of carbon dioxide emissions and a further 3.5% to made-made radiative forcing. However, this was based on 1992 data. In 2006 T&E noted that "growth in CO2 emissions from international aviation since 1990, the base year of the Kyoto Protocol, now stands at 83%."[12]

T&E and Climate Action Network Europe also argue that IATA's claim that aircraft are 70% more efficient than they were 40 years ago is also misleading. (The IPCC also used the 70% figure in part of one of its reports). However, T&E point out that the 40 year timeframe adopted only addresses "fuel efficiency during the jet era." T&E noted that a consultancy report done for them by the Dutch Aerospace Laboratory showed that the claimed 70% improvement "is only part of the story at best and that over the last 50 years there has in fact been scarcely any improvement at all in aircraft fuel efficiency. Aircraft manufactured in the early 1950s – such as the Lockheed Constellation – were two to three times as fuel efficient as the early jets that succeeded them and virtually as efficient as the aircraft sold today."[12]

T&E and CAN Europe also dispute the claims made by IATA on its website that "Modern aircraft achieve fuel efficiencies of 3.5 litres per 100 passenger km" and that "the A380 and B787 are aiming for 3 litres per 100 passenger km – better than a compact car!"[13] They point out that the "the figures of 3 or 3.5 litres per 100 passenger kilometres assume a full aircraft, i.e. a load factor of 100%, while they are in fact figures per aircraft seat kilometre. Load factors are typically only about 70%, however." They also point out that the 3 litres per hundred kilometer figures relates only to long-haul flights with large aircraft which aren't competing with cars while aircraft that are smaller and fly shorter routes are less efficient. They also point out that "the climate impact of non-CO2 emissions is ignored. Because of the effects of NOX, contrails and cirrus clouds at high altitude, a litre of fuel burnt in an aircraft at such altitudes has a greater climate impact than a litre burned by land sources."[12]

The staff in IATA's Environment section are:[16]

The members of the Board of Governors are:[17]

The Industry Affairs committee advises the organisation on "regulatory aspects of commercial/industry affairs and aeropolitical matters affecting international passenger air transport. It assists IATA in identifying and developing industry policies and positions, supervising policy implementation and promoting policy campaigning." The committee has 20 members; the committee Chairman is Giorgio Callegari, the Corporate Vice President, Alliances & Business Development Alitalia; the Secretary is Thomas Windmuller, the Senior Vice President of IATA. IATA also hosts a private website "for information exchange and discussion for IAC Members and for all representatives of IATA Members that work in the regulatory/industry affairs field."[18]