The International Maritime Organization (IMO) is the specialized United Nations agency concerned with international maritime activities. The Convention establishing the IMO was adopted in Geneva in 1948 and IMO first met in 1959. The main task of the organization has been "to develop and maintain a comprehensive regulatory framework for shipping and its remit today includes safety, environmental concerns, legal matters, technical cooperation, maritime security and the efficiency of shipping." Representing 168 Members States and three Associate Members, IMO is based in the United Kingdom with around 300 international staff.[1]

The Kyoto Protocol, which was negotiated in 1997, stated in Article 2, section 2 that:

However, in the 2007 Fourth Assessment Report the Intergovernmental Panel on Climate Change (IPCC) reported that IMO has not "yet been able to devise a suitable framework for implementing effective mitigation policies."[3]

Prevention of Air Pollution from Ships

Regulations for the Prevention of Air Pollution from Ships were adopted in the 1997 Protocol to MARPOL 73/78 and are included in Annex VI of the Convention, which entered into force on 19 May 2005. MARPOL Annex VI sets limits on sulphur oxide and nitrogen oxide emissions from ship exhausts, prohibits deliberate emissions of ozone depleting substances, and also sets limits on emissions of nitrogen oxides from diesel engines.

The Marine Environment Protection Committee (MEPC) of the IMO at its 53rd session in July 2005 adopted amendments to MARPOL Annex VI, including the approval of Interim Guidelines for Voluntary Ship Carbon Dioxide Emission Indexing for Use in Trials. At its 57th session in March and April 2008, MEPC approved proposed amendments to the MARPOL Annex VI regulations to reduce harmful emissions from ships, mainly focusing on a progressive reduction in sulphur oxide emissions from ships.

The IMO organized an inter-sessional Working Group on Greenhouse Gas Emissions from Ships in Oslo, Norway, from June 23-27, 2008, to consider technical issues related to controlling greenhouse gas emissions from ships. The IMO is “planning to propose a legally-binding regime on controlling shipping emissions of greenhouse gases at the fifteenth Conference of the Parites (COP15) to the United Nations Framework Convention on Climate Change (UNFCCC) in December 2009.” At the meeting in Oslo, “the experts participating shared views and information on a mandatory ‘CO2 Design Index’ for ships,” and “the meeting also discussed international regulatory options, such as imposing a levy on [carbon dioxide] emissions from the shipping sector, or developing an emissions trading scheme.” The Working Group will report back to the IMO Marine Environment Protection Committee, which is scheduled to meet October 6-10, 2008, in London, United Kingdom.[5]

If the IMO was under pressure to table proposals for consideration at the COP14 meeting in Poznan in December 2008, it didn't show it. While the Poznan meeting is intended to develop a framework for negotiations aimed at concluding by the COP15 meeting in Copenhagen, the IMO foreshadowed only that it would establish a "working group" to consider greenhouse gas emissions and was "working in accordance with an ambitious work plan, due to culminate, in 2009, with the adoption of a binding instrument. IMO is working to have measures in place to control GHG emissions from international shipping before the first commitment period under the Kyoto Protocol expires at the end of 2011."[6]

Criticisms of the IMO 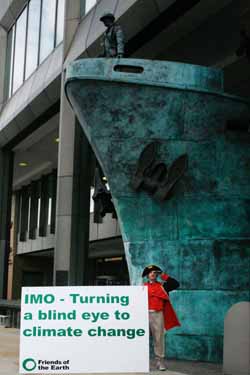 Friends of the Earth protests at the IMO office

In July 2009, Friends of the Earth protested outside the IMO's London headquarters to coincide with the final Marine Environment Protection Committee meeting before the COP15 meeting in Copenhagen in December. FOE's Executive Director Andy Atkins accused the IMO of "turning a blind eye to climate change." FOE stated that despite the IMO "claiming to be 'energetically pursuing the limitation and reduction of greenhouse gas emissions from shipping operations', the IMO has so far done little to cut emissions from ships. Global shipping emissions have risen by 85 per cent since 1990 - and by almost 50 per cent since 1997 alone - and now account for more than three per cent of annual global emissions, more than the entire UK economy. Yet a recent IMO study predicts that 20 per cent emissions cuts are possible by 2020 at no cost to shipping operators."[7]