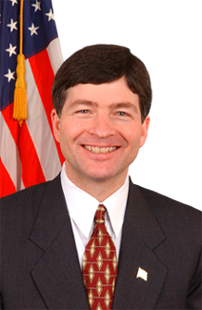 Thomas Jeb Hensarling is a Republican member of United States House of Representatives from Texas' 5th Congressional distrcit. Hensarling serves as the chair of the House Financial Services Committee and is a front-runner to serve as Treasury Secretary in President-elect Donald Trump's cabinet.[1]

As chair of the House Financial Services Committee, Hensarling has taken the lead of the effort to repeal Dodd-Frank.

Hensarling at Forefront of the Effort to Repeal Dodd-Frank

Hensarling is a leading proponent of a dramatic repeal of the Dodd-Frank Wall Street Reform Bill. His bill would repeal the Volcker Rule, which bans banks from making speculative bets with their own accounts, and end the Financial Stability Oversight Council's authority to deem financial institutions whose collapse pose a threat to the entire financial system as “systemically important” and deserving of a higher level of regulation and oversight, and cripple the Consumer Financial Protection Bureau. Read more from Americans for Financial Reform. [3]

The National Commission on Fiscal Responsibility and Reform (often called Bowles-Simpson/Simpson-Bowles Commission after the co-chairs Alan Simpson and Erskine Bowles) is a Presidential Commission created in 2010 by President Barack Obama to identify "…policies to improve the fiscal situation in the medium term and to achieve fiscal sustainability over the long run." The Commission first met on April 27, 2010. In November of 2010, the Commission's two chairmen released a draft report that was met with a barrage of criticism. The plan contained painful austerity measures that critics contended would further weaken the economic recovery. It called for cuts in benefits for the elderly, veterans, and many government employees. Most importantly, it would have cut the Social Security “cost of living” or COLA increase. Reduced COLA would amount to a benefit cut of close to 3 percent for a typical retired worker. Since the median income for households of people over age 65 is just $31,000, this would be a big hit to a segment of the population that is already struggling.[4]

Jeb Hensarling Chaired the Republican Study Committee in the 110th Congress (2007-2008) on the eve of the Wall Street financial meltdown. He followed Rep. Mike Pence (R-IN). The right-wing RSC was founded in 1973 by Paul Weyrich and other conservative activists to keep a watch on the House Republican leadership, which they saw at the time as too moderate.

Weyrich famously observed that with regard to the conservative movement "our leverage in the elections goes up as the voting populace goes down."[6] Weyrich helped found the Heritage Foundation, the American Legislative Exchange Council and other far-right institutions.

When Weyrich died in 2008, then-RSC Chair Jeb Hensarling (R-TX) issued a statement saying, "The Heritage Foundation, which he co-founded, is an intellectual home for all conservatives. And without Paul, the Republican Study Committee, which he worked to create, would not exist today. His ideas and principles will be carried on by not just the Republican Study Committee and the Heritage foundation, but by conservatives across the country that rely on the institutions which Paul worked to establish."

Jeb Hensarling's top contributor in 2016 was Bank of America according to the Center for Responsive Politics.[7]