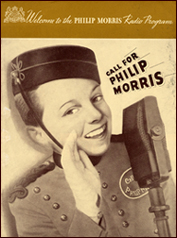 Because the "Philip Morris" brand had a man’s name, Biow thought it might be a novel idea to have a commercial built around a bellboy "paging" Philip Morris. He visited New York’s Commodore Hotel, asked for the best bellhop in town and was directed to Johnny Roventini, then a 22-year-old who worked at the Hotel New Yorker.

Johnny Roventini grew to a height of only 43 inches due to a pituitary gland disorder. In his late teens he went to work as a page boy in New York hotels where his high, clear voice was an asset. Biow gave Roventini $1.00 to go around the hotel announcing that there was a phone call for Philip Morris. Johnny scurried all over the lobby, up to the mezzanine, into the barbershop and through the dining room emitting a vibrant even piercing but never shrill cry: "Call for Philip Morris!" Johnny was hustled over to the NBC studio, where Philip Morris' weekly radio program, a musical variety show under the supervision of orchestra conductor Ferdinand Rudolph Grofe, was in rehearsal. On testing, Johnny's call proved to be a perfect B-flat pitch that worked well harmonically with the "on the trail" section in E-flat of the Grand Canyon Suite, the musical signature for the Philip Morris radio show.

Johnny not only sounded good, but his small, even features gave him a porcelain-doll look and slender form. He looked good, too, especially when marched into the Brooke's Casting Shop and outfitted in a tight red jacket with bright gold buttons, black trousers with a red stripe, white gloves, and a black pale box hat. Before long 100 thousand life-size, cardboard cut out likeness of the uniformed Johnny and foot high statuettes of him were on their way to cigarette vendors all over the country for display purposes. When the announcer introduced Johnny as "stepping out of the store windows and showcases all over America" to deliver his patented call at the beginning and end of each weekly radio broadcast, the sound of tinkling glass was all but palpable. The little man became a living trademark, and the brand he pushed began to sell seriously.

(Parts of the above passage about Johnny Roventini were adapted in part from an excerpt of the book Ashes to Ashes: America's Hundred-Year Cigarette War, the Public Health, and the Unabashed Triumph of Philip Morris, by Richard Kluger, pp. 97-99)