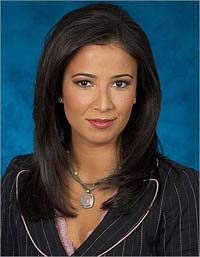 Julie Banderas is a reporter for Fox News. "Based in New York, she joined the network in March 2005 and recently provided extensive reports from Florida on the Terri Schiavo case," a bio profile of her states on Fox News website. [1]

"Prior to joining FNC, Banderas was the weekend anchor at WNYW-TV (FOX) in New York. Earlier, she served as an anchor for several local news stations, including WFSB-TV (CBS) in Hartford, and WHSV-TV in Harrisonburg, Virginia. While at WHSV-TV, Banderas produced the weeknight newscast and wrote their weekly franchise Making a Difference. She began her career at WLVI-TV in Boston," the biographical note states.

In the Center for Media and Democracy's report on the use of [[video news releases-- - Fake TV News: Widespread and Undisclosed - Dan Price noted:

"on June 10, 2005, KTXL-40 (Sacramento, CA) ran a 90-second news segment on a new dental technique that can test a person for potential diseases through their own saliva samples. After a quick intro, anchor Shana Franklin tossed the story to FOX News Channel's Julie Banderas, who "shows us how regular visits to the dentist's office could one day be a thing of the past." Unfortunately the story came straight from the mouths of dentists themselves. The KTXL-40 story was built almost exclusively from a video news release (VNR) that was created by MultiVu on behalf of the American Dental Association (ADA). [2]