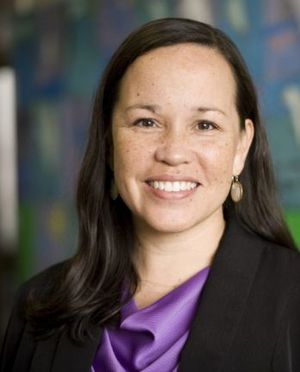 Kriste Dragon is the CEO and co-founder of Citizens of the World Charter Schools, a network of public charter schools in Los Angeles and Kansas City. Prior to founding Citizens of the World Charter Schools, Dragon served as Executive Director of Teach for America Los Angeles and Vice President of Regional Operations for Teach For America’s western regions. She also served as a professional development coordinator at UCLA’s Center X, where she developed mathematics curriculum and trained teachers in the Los Angeles Unified School District. Previously, Dragon was a middle school mathematics teacher in South Los Angeles, and she has chaired several charter school boards throughout Los Angeles.[1] Dragon was a founding co-chair of the National Advisor Board of The Collective, Teach for America’s national alumni of color association. She has also served on the boards of the National Association of Charter School Authorizers, the National Charter Collaborative, and EdNavigator. Dragon has a JD from the University of Georgia and a bachelor’s degree in communications from the University of Alabama. Dragon was a Broad Academy fellow from 2015 to 2016 and is currently part of the Broad Fellowship for Educational Leaders.[2][3]

Dragon has been a board member for several charter school and education reforms organizations. She’s a member of the Advisory Board for the National Association of Charter School Authorizers and the National Charter Collaborative, and she was previously a member of the California Charter Schools Association’s Political Council. She’s also the board chair for EdNavigator, an education reform organization an education reform that is “dedicated to building support for student-focused improvements in public education.”[2][3] EdNavigator receives funding from the Bill & Melinda Gates Foundation, Bloomberg Philanthropies, the Carnegie Corporation of New York and the Walton Family Foundation.[4][5][6]

Dragon is currently a fellow at the Pahara-Aspen Fellowship,[2][7] a leadership program within the Aspen Institute, a pro-education reform think tank that is funded by large education reform organizations, including the Bill & Melinda Gates Foundation and the Carnegie Corporation of New York.[8][9][10] Dragon is also a network member and guest blogger for Education Post, a national blog that publishes stories about challenges and needed reforms in education.[11] Education Post supports school accountability and “strong charter schools.” It has received funding from several organizations that promote education reform, school choice, and privatization, including the Bill & Melinda Gates Foundation, the Walton Family Foundation, and Bloomberg Philanthropies.[12]

Problems With Citizens of The World Charter Schools

In January 2013, a local parent group in Brooklyn, New York, sued the state for approving a Citizens of the World run charter elementary school without sufficient "support from the impacted community." The lawsuit accused Citizens of the World of gathering support from a "select, cultivated group of parents" and holding "hidden meetings." The parent group that filed the suit claimed that “the state illegally ignored significant community opposition to the new charter,” which “received fierce criticism from WAGPOPS, Williamsburg Community Board One, local teachers and politicians.”[13]

In April 2013, a leaked internal enrollment plan for the Citizens of the World charter based in Crown Heights, Brooklyn, revealed that the school’s main engagement strategy targeted wealthy white families. A chart of priorities in the leaked memo listed the recruiters' top strategy as "engaging core parent group" and described the target of that strategy as "middle/upper income, predominantly white."[14] However, Citizens of the World charters purport to be “intentionally racially and socioeconomically diverse.”[15]

In December 2017, it was announced that both of the Citizens of the Worlds elementary schools based in New York were to be shut town at the end of the school year, after the board “decided the schools’ failure to improve their scores gave them a small chance of securing renewal.” The Citizens of the World networks in New York, both of which were launched in 2013, “struggled with leadership turnover at their regional office and within the schools themselves,” and “are also some of the lowest performing schools authorized by SUNY.” In addition, the schools fell “far below the overall charter school average in New York City,”[16] and the school in Williamsburg, Brooklyn, struggled with low enrollment.[16][17]

From 2008 to 2012, Dragon served as executive director of Wonder of Reading, a now-defunct nonprofit that donated “money to restock and renovate elementary school libraries that was founded by Chris Forman, a founding board member of Citizens for the World Charter Schools. In July 2009, NBC4, a local affiliate in Los Angeles, examined Los Angeles Unified School District (LAUSD) records and found evidence that Wonder of Reading engaged in “double-dealing,” “kickbacks,” and other corrupt practices. For instance, Chuck Gomez, the designated “construction manager” for Wonder of Reading, “turned the program into a huge cash cow for friends and family” by “subverting the way LAUS awards construction contracts” to guarantee that awards would go to a specific construction company owned by his friend and the two would share money saved by cutting corners on projects.[18][19][2] Notably, Dragon doesn’t mention her previous work for Wonder of Reading on her official biography listed on the Citizens of the World website.[2]