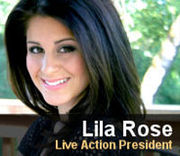 Lila Rose is a conservative activist and anti-abortion videographer whose work is promoted by Andrew Breitbart. Her goals are to undermine organizations that provide legal abortions and de-fund Planned Parenthood. She is president of the anti-abortion group Live Action. Rose likened herself to Martin Luther King, Jr. in a CNN documentary called "Right on the Edge." At the November, 2009 Value Voters Summit, she said that as long as abortions are legal, they should be "done in the public square," thus disgusting people into action. And then "we might hear angels singing as we ponder the glory of conception." [1][2][3]

Lila Rose is a colleague of conservative activist James O'Keefe. As a UCLA freshman in autumn of 2006, she and O'Keefe came up with the idea of infiltrating clinics. Rose and O'Keefe, both told the Los Angeles Times that they were inspired by the work of Mark Crutcher, a Texas antiabortion activist who in 2002 taped fake calls to hundreds of Planned Parenthood clinics around the country featuring women posing as pregnant minors.[4]

In 2006 Rose has carried out undercover "sting" visits at Planned Parenthood clinics in Los Angeles, Indianapolis, Bloomington, Tucson, Phoenix and Memphis. She makes hidden camera videos as she and a friend pose as abortion-seeking young teens who have been impregnated by older men. Rose's videos are then edited down to about boiled five minutes, and are enhanced with portentous music and fast cuts to heighten the drama. Rose them posts the videos on her website, LiveAction.org, and on YouTube.[5]