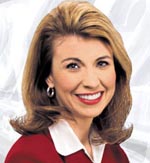 She is alsoa reporter for the station "covering consumer issues and solving specific consumer problems. Margie joined FOX 2 News in June of 1999 as a general assignment reporter. Margie has also had quite a stint in radio, co-hosting with Smash on KSD-FM, anchoring the news on Z-107-7 and then as a newcaster and castmember on the nationally syndicated Steve and DC Radio Show. Before starting at FOX 2, Margie worked as a morning anchor and reporter for KMOV-TV. Before making the move to St. Louis she worked for KRCG-TV in Jefferson City, Missouri as a weekday anchor/reporter. She's been recognized for numerous honors." [1]