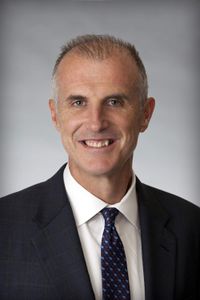 Mark Holden is senior vice president, general counsel and corporate secretary of Koch Industries. He has been described as a "close advisor" to Charles Koch.[1] In a feature article on Holden, Yahoo describes him as a "fierce and loyal guard dog for the company" and the "creator of a rapid-response team to hit back against negative portrayals in the media and political sphere."[1]He also serves as president and COO of the Legal Division of Koch Companies Public Sector.

In addition to these roles, Holden is chairman of the board at the Freedom Partners Chamber of Commerce, a group Politico refers to as "the Koch brothers' secret bank," and a board member at Americans for Prosperity, the Kochs' astroturf political operation.[2]

As reported by Jane Mayer in The New Yorker, Holden has visited the White House four times to meet with Obama’s senior adviser Valerie Jarrett in order to discuss criminal justice reform in the US.[3] In the same article, Holden is quoted as saying, "The criminal-justice system is a big-government program that has failed miserably."[3]

Many experts see the Kochs involvement in criminal justice reform as self-interested, as they have been the defendants in numerous lawsuits in states across the nation. University of Michigan law professor David Ullmann argues that, “The Koch brothers are not interested in criminal-justice reform because they suddenly became interested in the number of poor and minority Americans who are in prison. By their own admission, they became interested because they were prosecuted in Corpus Christi. They and their allies want to take us back to 1970, before the regulatory state.”[3][4]

Brendan Fischer and Lisa Graves at the Center for Media and Democracy have published extensively on the topic; "as the Kochs ride the wave of momentum toward criminal justice reform, it is becoming increasingly clear that part of their agenda would actually make it harder to prosecute corporate violations of environmental and financial laws that protect the public from corporate wrongdoing. The changes would make it harder to hold executives and their employees responsible for violating U.S. laws and would protect their financial interests, at the public's expense."[4]

In an opinion piece in the The Wall Street Journal on December 8, 2015, Mark Holden pushed for reforms to the occupational licensing system. The Koch-funded corporate lobbying organization the American Legislative Exchange Counsel has a model bill entitled, "Occupational Licensing Relief and Job Creation Act." The bill seeks to eliminate most types of occupational licenses across the country, which he calls in the piece, "needless barriers to opportunity."[5] Holden fails to mention in his Op-Ed that occupational licenses are not just "barriers to opportunity." Obtaining a license can result in higher wages and the training required to get a license usually involves lessons on workplace safety, which reduces occupational hazards.[6]

Before serving in his current capacities for the Koch machine, Holden was a litigation attorney, and was vice president and general counsel for litigation and compliance with Koch Industries.[7] He came to the Kochs from Akin, Gump, Strauss, Hauer & Feld, where he was an associate.[7]

Mark Holden has a bachelor’s degree in political science from the University of Massachusetts and a law degree from the Columbus School of Law at the Catholic University of America.