The NOH8 Campaign is a non-profit organization, photo project and silent protest created by celebrity photographer Adam Bouska and partner Jeff Parshley in response to the passage of Proposition 8 in California on November 4, 2008, which amended the state's constitution to ban same-sex marriage.[1]

The campaign started with everyday Californians who supported marriage equality, and eventually grew to include celebrities, politicians, military personnel and others. Photo subjects are shown with duct tape over their mouths to symbolize their voices not being heard, and "NOH8" painted on one cheek in protest. 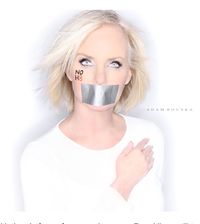 Photo of Cindy McCain, by Adam Bouska, for NOH8 Campaign

The campaign started drawing more attention when Cindy McCain, wife of 2008 Republican Presidential nominee and Arizona Senator John McCain, asked to be photographed in support of the campaign. The McCains' daughter Meghan, who has been outspoken in her support for gay rights, has also endorsed NOH8 and had her photo taken.[2][3]