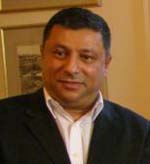 Nic Careem is a founder of the Blue Sky Network.[1]

In April 2007 Careem waxed lyrical about Dr Abdul Gayoom, the President of the Maldives. "We all found Dr Gayoom to be an impressive man who has made some genuine steps towards democratic reform. We were able to go wherever we wanted, without any restrictions, and speak to anyone we wanted to. Dr Gayoom spoke of his concerns on global warming nearly two decades before Al Gore and has even written a book about it. We were all impressed with the healthcare and prison system. In fact health care is as good as anything you find in the NHS. As no one pays tax on the Maldives this level of care is remarkable. We were also allowed to visit one of the few Islands prisons in the world. We were impressed with the humanity shown to prisoners. All cells had fans, showers and toilets. One of our party, a retired judge and QC, was heard to jokingley ask one of the offficals whether he could book two weeks on the island for his family in July," he said. [2]

In September 2007, Minivan News reported that Careem stated that he wanted to "increase the attention of the concerns of the Maldives…including the President and his Government on global warming." However, he denied that Blue Sky was a PR firm working to boost the image of Gayoom's regime. Instead he described "an international network of influential people of from politics, media and business who want to use their talent and influence to make a difference to bits of the world." [3]

While Careem rejects the suggestion that he runs a PR firm, a biographical note describes him as a "public affairs consultant" and "an active member of the Labour Party". [4]

Though these days Careem is an active and vocal supporter of David Cameron and the Conservatives". [5]

In 1999 Careem originated a book containing tribute messages from political leaders, celebrities and community members for Nelson Mandela. [6]In early 2007 Careem was working on promoting and producing an anti-hate play about Eva Schloss, the step-sister of wartime diarist Anne Frank. [7] He has also launched a program to have British local governmenmt districts partner with districts in Africa. [8]

Careem is also the campaign manager for John Bird, an independent candidate for the Mayor of London in the 2008 election. [9]