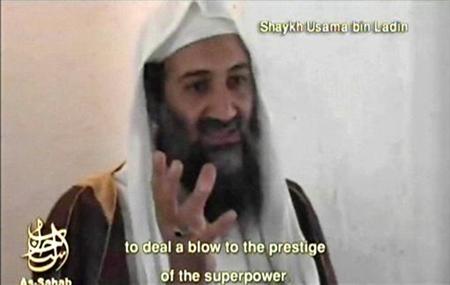 The August 2, 1990, Iraqi invasion of Kuwait during the George H.W. Bush administration "apparently turned" bin Laden from "a de-facto U.S. ally against the Soviet Union into one of its most active adversaries. ... He relocated to Sudan in 1991, buying property there which he used to host and train Al Qaeda militants — this time, for use against the United States and its interests, as well as for jihad operations in the Balkans, Chechnya, Kashmir, and the Philippines," Kenneth Katzman wrote in the February 10, 2005, CRS Report for Congress.

In August 1998, when President Bill Clinton ordered anti-terrorist bombings in Afghanistan and Sudan in an attempt to get bin Laden, who was "suspected of bankrolling the installations that were bombed", some lawmakers "criticized him harshly as a leader critically weakened by poor judgment and reckless behavior in the Monica S. Lewinsky scandal." [1]

Senator Arlen Specter (R-Pa.), "one of Clinton's severest critics", said "There's an obvious issue that will be raised internationally as to whether there is any diversionary motivation". Then-Senator John Ashcroft (R-Mo.) "noted 'there is a cloud over this presidency.'" Senator Dan Coats (R-Ind.) said "The president has been consumed with matters regarding his personal life. It raises questions about whether or not he had the time to devote to this issue, or give the kind of judgment that needed to be given to this issue to call for military action." [2]

In late 2005, the Central Intelligence Agency unit known as Alec Station, "which had the mission of hunting Osama bin Laden and his top lieutenants", was disbanded and "its analysts reassigned within the C.I.A. Counterterrorist Center," Mazzetti reported officials said.

Bin Laden "was socialized by the CIA and trained by the Americans to believe deeply that when a foreigner comes into your land, you become violent. Bin Laden is merely carrying out the mission to which he committed with America earlier. Now he is carrying it out against America because now America, from his point of view, is occupying his land. That's all. He grew up seeing Saudi Arabia being robbed by Western corporations and Western powers. He watched these Saudi princes, this one-family state, handing over the oil resources of the Arab people to the West. Up until 1991, he had only one satisfaction: that his country was not occupied. There were no American or French or British troops in Saudi Arabia. Then even that small pleasure was taken away from him during the Gulf War and its aftermath. ...

"Before shifting against the West, Osama Bin Laden was one of the financiers who played the 'great game' in that region. Along with Abdullah Azzam, the Palestinian Muslim Brotherhood leader he founded in the mid- 1980s the Services Office (Maktab al Khadamat: MAK), which established recruitment centers around the world. Azzam was killed by a car bomb in late 1989; the MAK split, with the extremist factions joining Bin Laden.

"Bin Laden ran the Jihad Committee which includes the Egyptian Islamic group, and the Jihad Organization in Yemen, the Pakistani al-Hadith group, the Lebanese Partisans League, the Libyan Islamic group, Bayt-el-Imam group in Jordan, and the Islamic group in Algeria. According to some sources, this committee has a bureau in London." [4]

"Why don't President Bush and Osama bin Laden just get a room? Judging from events over the weekend, they need each other as much as they despise each other. The latest crackly tape issued by bin Laden (if it's him) confirms that al-Qaeda has no independent programme or war aims, but merely feeds off Western fears. And Bush's response - 'the bin Laden tape [shows] this is still a dangerous world' - suggests that his administration will leap on any squeak from the man on the mountain to justify the war on terror. B&B are more and more like a parasitical double act. ...

"Bush and bin Laden may be after each other's blood, but they'd miss each other in the long run."—Brendan O'Neill, "Sleeping with the enemy," October 21, 2003.