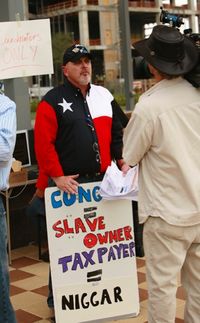 Pat Robertson (Marion Gordon Robertson) founded the Christian Coalition of America in 1989 and headed the organization until his resignation in December 2002.

Robertson is the founder and chairman of The Christian Broadcasting Network (CBN) Inc. -- described as "a dedicated earth satellite station" -- based in Virginia Beach, Virginia, from which he broadcasts and hosts the "700 Club" program. Robertson is the founder of International Family Entertainment Inc., Regent University, of which he is president and chancellor, Operation Blessing International Relief and Development Corporation, American Center for Law and Justice, The Flying Hospital, Inc. and "several other organizations and broadcast entities." [1][2]

According to his "official site", "M. G. 'Pat' Robertson has achieved national and international recognition as a religious broadcaster, philanthropist, educator, religious leader, businessman, and author. He is the founder and chairman of The Christian Broadcasting Network (CBN) Inc., and founder of International Family Entertainment Inc., Regent University, Operation Blessing International Relief and Development Corporation, American Center for Law and Justice]], The Flying Hospital, Inc. and several other organizations and broadcast entities.

"Founded in 1960, CBN was the first Christian television network established in the United States. Today CBN is one of the world's largest television ministries and produces programming seen in 180 nations and heard in 71 languages including Russian, Arabic, Spanish, French and Chinese. CBN's flagship program, The 700 Club, which Mr. Robertson hosts, is one of the longest running religious television shows and reaches an average of one million American viewers daily."

"Robertson was born on March 22, 1930, in Lexington, Virginia, to A. Willis Robertson and Gladys Churchill Robertson. His father served for 34 years in the U.S. House of Representatives and U.S. Senate. Robertson's ancestry includes Benjamin Harrison, a signer of the Declaration of Independence and governor of Virginia, and two United States presidents, William Henry Harrison and Benjamin Harrison, the great-grandson of the signer of the Declaration of Independence. Robertson also shares ancestry with Winston Churchill."

"After graduating with honors from McCallie School in Chattanooga, Tennessee, a military prep school, Robertson entered Washington and Lee University in 1946, where he was elected to Phi Beta Kappa. In 1948 he enlisted in the U.S. Marine Corps Reserve. After graduating magna cum laude with a Bachelor of Arts degree from Washington and Lee in 1950, Robertson served as the assistant adjutant of the First Marine Division in combat in Korea. He was promoted to first lieutenant in 1952 upon his return to the United States. Robertson received a juris doctor degree from Yale University Law School in 1955 and a master of divinity degree from New York Theological Seminary in 1959."

"Robertson is past president of the prestigious Council on National Policy. In 1982 he served on President Ronald Reagan's Task Force on Victims of Crime. He is currently a member of the Board of the Virginia Economic Development Partnership, and previously served on the Governor's Council of Economic Advisors in the State of Virginia."

In 1988 Pat Robertson ran for President in the Republican Primaries and beat sitting Vice President George Bush Sr. in the Iowa Republican caucuses. [3]

Pat Robertson, was presented with The State of Israel Friendship Award by the Chicago chapter of the Zionist Organization of America in July, 2002.

Following the September 11, 2001 terrorist attacks on the United States, Robertson appeared together with Jerry Falwell on the "700 Club" and declared that the American Civil Liberties Union along with feminists, gays and abortions were responsible for the attacks because their lack of religion had caused God's wrath:

FALWELL: What we saw on Tuesday, as terrible as it is, could be miniscule if, in fact--if, in fact--God continues to lift the curtain and allow the enemies of America to give us probably what we deserve.

ROBERTSON: Jerry, that's my feeling. I think we've just seen the antechamber to terror. We haven't even begun to see what they can do to the major population.

FALWELL: The ACLU's got to take a lot of blame for this.

FALWELL: And, I know that I'll hear from them for this. But, throwing God out successfully with the help of the federal court system, throwing God out of the public square, out of the schools. The abortionists have got to bear some burden for this because God will not be mocked. And when we destroy 40 million little innocent babies, we make God mad. I really believe that the pagans, and the abortionists, and the feminists, and the gays and the lesbians who are actively trying to make that an alternative lifestyle, the ACLU, People For the American Way--all of them who have tried to secularize America--I point the finger in their face and say "you helped this happen."

ROBERTSON: Well, I totally concur, and the problem is we have adopted that agenda at the highest levels of our government. And so we're responsible as a free society for what the top people do. And, the top people, of course, is the court system. [4]

We have allowed rampant pornography on the Internet, and rampant secularism and the occult, etc. to be broadcast on television. We have permitted somewhere in the neighborhood of 35-40 million unborn babies to be slaughtered by our society.

We have insulted God at the highest level of our government. Then, we say, "Why does this happen?" It is happening because God Almighty is lifting His protection from us. Once that protection is gone, we are vulnerable because we are a free society.

Don't ask why did it happen. It happened because people are evil. It also happened because God is lifting His protection from this nation and we must pray and ask Him for revival so that once again we will be His people, the planting of His righteousness, so that He will come to our defense and protect us as a nation. [5]

Muslims are "worse than Hitler"

Somehow I wish the Jews in America would wake up, open their eyes and read what is being said about them. This is worse than the Nazis. Adolf Hitler was bad, but what the Muslims want to do to the Jews is worse. The idea that you are going to make peace with the Muslim world by giving them territory is an absolute illusion. Yet, at the same time the so-called "doves" in America will criticize anybody who says anything against Islam, including me, if I say something that Islam is an erroneous religion, I get criticized by the Anti-Defamation League. You just say, when are you guys going to open your eyes and see who your enemy is? Those people want to destroy Jews. The Koran teaches that the end of the world will not come until every Jew is killed by the Muslims. The Muslims must eliminate every single Jew before there will be a final conclusion of this world and the next kingdom comes into being. That is taught in the Koran, plus the fact, they are like apes and pigs. This is not exactly conducive to peace and brotherhood. [6]

American Center for Law and Justice

Robertson founded the ACLJ in 1990 to counter the efforts of the ACLU. Recently the center filed a lawsuit to block the construction of the Park51, which was intended to be a Muslim community center, in New york City. The ACLJ was also involved in a lawsuit that sought to "protect the free speech rights" of Barry Sommers, president of the ACT! For America branch in Oregon after his class at Lane Community College was dropped. Sommers tried to use the class to promote anti-Islamic hysteria.[1]

In July 2003, Robertson urged the "700 Club" audience to pray for God to remove three justices from the Supreme Court so they could be replaced by conservatives. "We ask for miracles in regard to the Supreme Court," Robertson said as he launched a 21-day "prayer offensive" directed at the Supreme Court in the wake of its 6-3 June vote that decriminalized sodomy. Robertson said in a letter on the CBN Web site that the ruling "has opened the door to homosexual marriage, bigamy, legalized prostitution and even incest." The same letter targeted three justices in particular: "One justice is 83-years-old, another has cancer and another has a heart condition. Would it not be possible for God to put it in the minds of these three judges that the time has come to retire?" [7]

Gold and Diamonds and Mr. Pat

Little known, except perhaps to trivia junkies is the fact the Robertson has had financial stakes in both gold and diamond mines in Africa and has invested $520,000 in a racehorse named Mr. Pat. [8] [9]. "Reporter Bill Sizemore of The Virginian Pilot later discovered that Operation Blessing's planes were transporting diamond-mining equipment for the African Development Corporation, a Robertson-owned venture initiated with the cooperation of Zaire's then-dictator Mobutu Sese Seko. After a lengthy investigation, Virginia's Office of Consumer Affairs determined that Robertson 'willfully induced contributions from the public through the use of misleading statements and other implications.' Yet when the office called for legal action against Robertson in 1999, Virginia Attorney General Mark Earley, a Republican, intervened with his own report, agreeing that Robertson had made deceptive appeals but overruling the recommendation for his prosecution. Two years earlier, while Virginia's investigation was gathering steam, Robertson donated $35,000 to Earley's campaign--Earley's largest contribution."[10].

"In April 2002, Robertson acknowledged owning a race horse, named "Mr. Pat." He told a New York Times reporter that his interest in the horse was based purely on its aesthetics. "I don't bet and I don't gamble. I just enjoy watching horses running and performing." Harder to explain was why he spent $520,000 on the horse and intended the beast to compete at the track. But the resulting furor over Pat's direct participation in a gambling racket eventually caused him to sell the horse a month after the Times story broke" [11] [12].

In August 2005, Robertson advocated that covert American agents should assassinate Venezuelan President Hugo Chavez: "We have the ability to take him out, and I think the time has come that we exercise that ability. We don't need another $200 billion war to get rid of one, you know, strong-arm dictator. It's a whole lot easier to have some of the covert operatives do the job and then get it over with."

"You know, I don't know about this doctrine of assassination, but if he thinks we're trying to assassinate him, I think that we really ought to go ahead and do it. It's a whole lot cheaper than starting a war ... and I don't think any oil shipments will stop," Associated Press reported. Asked about the comments at a Pentagon media conference, Secretary of Defense Donald Rumsfeld said "our department doesn't do that kind of thing. It's against the law. He's a private citizen. Private citizens say all kinds of things all the time." [13]