Paul Dundes Wolfowitz (born 1943), is best known to be one of the "architects" of the war against Iraq. He is one of the original neocons and signatory to the Project for the New American Century, PNAC. He served briefly as president of the World Bank in 2006, but resigned in disgrace in May 2007 due to ethics violations. In July 2007 he joined the American Enterprise Institute to work on "entrepreneurship and development issues, Africa, and public-private partnerships". [1] 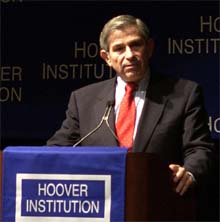 On December 3, 2007, Reuters reported that "Wolfowitz, forced to resign from the World Bank because of his role in obtaining a high-paying promotion for his companion, is slated to chair a U.S. State Department advisory panel on arms control, a U.S. official said on Monday. The official, who spoke on condition that he not be named because of the appointment has not yet been made public, said U.S. Secretary of State Condoleezza Rice planned to name the former deputy defense secretary and an architect of the Iraq war to chair the International Security Advisory Board. [1]

Wolfowitz's nomination to the World Bank

Wolfowitz was proposed to succeed James David Wolfensohn, whose second five-year term ends June 1, 2005. Wolfensohn was nominated by Bill Clinton. Although Wolfensohn privately let it be known that he desired to remain for another five years, the Bush administration had decided that it wanted "a new man to head the agency." It was originally believed that Robert Zoellick, the US trade negotiator, would be nominated. [2][3][4]

Wolfowitz's nomination was widely opposed in Europe. It is anticipated that Bush's nomination of Wolfowitz, "a key proponent of the 'neoconservative' political movement calling for a more aggressive U.S. foreign policy, is likely to be met with strong opposition by European nations opposed to the U.S.-led invasion and occupation of Iraq." [5] Wolfowitz had no prior experience in development or the environment, neither in banking.

Wolfowitz, considered to be one of the most prominent and "hawkish" of the neo-conservatives, is the principal author of the "Wolfowitz doctrine", also known as the Bush doctrine. His expertise is with the Middle East and Asia.

Wolfowitz has served under several presidents. He served as a military analyst under Ronald Reagan, first as Director of Policy Planning for the Department of State and later as Assistant Secretary of State for East Asian and Pacific Affairs 1982-1986. In 1986, he was appointed U.S. Ambassador to the Republic of Indonesia. Under President George Herbert Walker Bush, Wolfowitz served as Undersecretary of Defense for Policy."

From 1977 to 1980, he was Director of Policy Planning for the Jimmy Carter State Department, Deputy Assistant Secretary of Defense. From 1973-1977, Wolfowitz held a variety of positions in the U.S. Arms Control and Disarmament Agency including Special Assistant to the Director for the Strategic Arms Limitation Talks.

As a long-time member of the Project for the New American Century think tank, he signed the January 26, 1998 PNAC letter sent to President William Jefferson Clinton.[6]

The Evolution of the Wolfowitz Doctrine

Also attending at the University of Chicago at the same time was Attorney General-to-be John Ashcroft.

Wolfowitz taught from 1970-1973 at the Yale University (the homeland of Skull & Bones) and in 1981 he taught at John Hopkins University. In 1993, Wolfowitz became the George F. Kennan Professor for National Security Strategy at the National War College.

Source: translated online from the original German by Yahoo!; editted for clarity.

Wolfowitz's thought process "picked up where Wohlstetter left off. Where Wohlstetter had warned of preparing for a rearmed Russia and a nuclear China, Wolfowitz considered the third dimension along which nuclear strategy would evolve: proliferation.

In his dissertation on nuclear proliferation in the Middle East, he argued that the United States "needed to look beyond simply defending traditional allies against the communist bloc" and that areas "with natural resources vital to the U.S. economy ought to be as much a part of a strategic defense umbrella." Wolfowitz wrote that "anybody with the capability to threaten those areas must be regarded with concern. In true Wohlstetter fashion, Wolfowitz argued that even the hint of nuclear weapons in the Middle East would be a matter of the gravest concern."

"In 1969, in the thick of the ABM debate, Wohlstetter summoned Wolfowitz and Richard Perle, another protégé, to help him gather the information he needed to wage the Safeguard ABM system campaign. Housed in the offices of Sen. Henry Scoop Jackson, a Washington State Democrat and military hawk, Wolfowitz and Perle conducted interviews and drafted a report.

"Wohlstetter's two young acolytes were quickly immersed in the world of Washington politics. Wolfowitz entered government service as a junior officer in the Middle East section of the Defense Department and quickly rose through the ranks to head the Arms Control and Disarmament Agency under Presidents Gerald R. Ford and Jimmy Carter." [20]

John R. Bolton’s "boss", Deputy Secretary of Defense Paul Wolfowitz, was considered as a "possible replacement" for Condoleezza Rice. "An architect of the war in Iraq, Wolfowitz has been under fire by Democrats for the lack of postwar planning. The national security adviser does not need to be confirmed by the Senate, so Democratic disdain for Wolfowitz would not be a factor. ...

Bolton, Wolfowitz, and Secretary of Defense Donald Rumsfeld, "have come to define a Bush doctrine of bold diplomacy. And if, as is likely, neoconservatives return to favor at the White House, they could stand to gain."

"Wolfowitz's largest source of income was as co-chairman, with former Senate Armed Services Committee chairman Sam Nunn (D-Ga.), of Hughes Electronics Nunn-Wolfowitz Task Force, for which he was paid $300,000. The task force analyzed Hughes' compliance with U.S. export restrictions on high technology goods. He was also a dean and professor at Johns Hopkins University's School of Advanced International Studies, which earned him an additional $247,000. He earned another $55,000 in speaking fees from several groups, including JP Morgan, the Heritage Foundation, Hudson Institute, and Syracuse University. Wolfowitz also managed to stay busy doing consulting work for BP Amoco, Northrop Grumman and The Limited Service Corporation, as well as being on the board of directors for Hasbro and financial services company Dreyfus, as well as several non-profit groups; his consulting and board fees totaled nearly $130,000. Wolfowitz's largest single asset is Hasbro deferred compensation worth as much as $250,000." [24]

"According to the Center for Political Integrity, nine out of 30 past and present members of the influential Defense Policy Board, had ties to defense firms with $76 billion in DOD contracts.

"The list is a veritable 'who's who' in the Bush Administration: ...

Failing Grade in Math 101. Not good news for a prospective banker.

"As riveting as Midge finds Rummy, it is her description of Paul Wolfowitz as a 'former mathematician' that riveted me. The whole attitude of Rummy and Wolfie at Congressional hearings was 'Barbie hates math.' They couldn't come up with a concrete number for anything.

"Skeptical, I checked and discovered that Wolfie's father was a mathematician from Cornell (Jacob Wolfowitz) who specialized in probability and statistics; he hoped his son would follow in his footsteps, considering political science on a par with astrology.

"Instead, his son chose the field of obscuring probability and statistics, refusing to cooperate with lawmakers to add up how much the war was going to cost in dollars and troops and years, or to multiply the probable exponential problems of remaking the Middle East, or even to subtract the billions that were never coming from snubbed allies.

"I guess Wolfie never calculated the division in America his omissions would cause when we finally got a load of the bill -- including $100 million to hide the families of 100 Iraqis in the witness protection program, $19 million for post office Wi-Fi, $50 million for traffic cops and $9 million for ZIP codes. At these prices, the Baghdad ZIP better be 90210."