The Food Rights Network is a non-profit, non-partisan research and advocacy project of the Center for Media and Democracy.

Raw milk is milk that comes directly from cows, goats and sheep. It is not modified by processes such as pasteurization and homogenization. Farmers’ practices, such as how those animals are fed, milked, and treated, along with how the raw milk is stored and transported, are critical to the quality of that milk. FRN supports the policies and practices in dairy farming that make it possible to have appropriately sized herds and pasture for grazing that will help ensure good quality milk. FRN supports practices in storage and transportation of raw milk that have made this a safe and healthy product for generations. FRN supports the farmer’s right to sell raw milk to individuals and commercial enterprises both on and off the farm. FRN supports the milk drinker's right to purchase raw milk both on and off the farm.

The Latest from the Food Rights Network 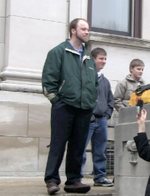 As snow started to fall, a Mennonite dairy farmer arrived at the courthouse in Baraboo, Wisconsin, on March 2 for a hearing on four charges against him related to the production and distribution of milk and other foods. Vernon Hershberger operates Grazin' Acres Farm, a small family dairy farm in Loganville, and is part of a private food club that leases his cows and receives distributions of raw milk and other foods via what he calls a members-only "food pantry" on the farm.

Wisconsin allows incidental sales of raw milk on-farm without a license. Critics claim that the Wisconsin Department of Agriculture, Trade and Consumer Protection (DATCP) interprets this law more strictly now than it has in the past.

Hershberger is being charged by the state of Wisconsin not with selling raw milk, but with operating a food establishment without a license, producing milk without a license, operating a dairy plant without a license and violating a hold order that was placed on his coolers during a June 2010 raid. Hershberger claims he does not participate in commerce, but instead has a contractual arrangement with the leaseholders of the farm's livestock. The state's charges could land him in prison for three years, with fines of over $10,000. . . .

Despite an impending snow storm, about 300 people gathered in front of the Sauk County District Courthouse in Baraboo before the hearing to support Hershberger, the food club members and what they say are food rights.

The "Raw Milk Freedom Riders" group, unveiled a "Declaration of Food Independence" beside the courthouse steps. It proclaims that "inherent in every individual is the God-given right to procure the food of one's choice from consenting farmers and producers." Hershberger was the first to sign.

Food Club Members Defend their Contract and their Farmer 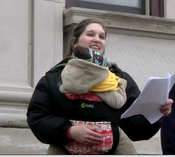 One of the members of the club, Kelly West of Middleton, Wisconsin, said, "Vernon is not selling to the public. We pay him to board and care for our animals. We own the cows. We own the food. This arrangement is permitted under the Wisconsin State Constitution. ... We are not asking that this milk be able to be sold in the nearest grocery store, as wonderful and convenient as that would be. No, all we want is to be left alone. This government is supposed to protect our liberties, but instead it's taking them away."

West emphasized, "In the last several years, the family farm has become an endangered species. There have been undercover stings and raids on family farmers, and all over what? Milk! Vernon could go to jail for distributing milk! ... I can feed my kids soda pop and candy bars all day long. Is it healthy? No. Is it legal? Yes. I can give my kids fresh milk from a local farm. Is it healthy? Yes. Is it legal? No."

The Raw Milk Raid Timeline provides a timeline of government raids of farmers and others selling and/or distributing raw milk.

Local Food and Self-Governance Ordinances, first drafted in four towns in Hancock County, Maine, are town ordinances establishing local food governance in response to increased federal regulation via the "Food Safety Modernization Act."[11] Residents who drafted the ordinances in 2010 and 2011 feared that the new law, which President Obama signed on January 4th, 2011, could shut down cottage producers of jam and pickles made from backyard garden produce and church pot lucks without these local ordinances to protect them.[12][13] 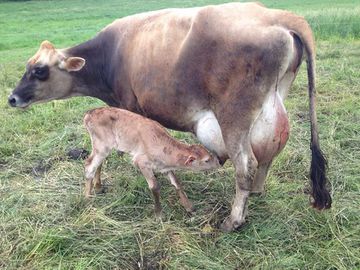 You can contact the FRN by email to FoodRightsNetwork AT gmail.com. You can also sign up to receive helpful news:
 Sign up for news and updates from the Food Rights Network!

Sign up for news and updates from the Food Rights Network!