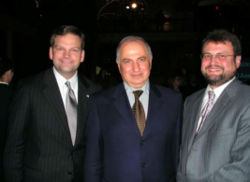 Randy Scheunemann was the President of the Committee for the Liberation of Iraq, which was created by the Project for the New American Century (PNAC), of which he is a board member. He was Trent Lott's National Security Aide and was an advisor to U.S. Defense Secretary Donald Rumsfeld on Iraq. He is 2008 U.S. presidential candidate John McCain's foreign-policy aide.[1]

Scheunemann has been criticized for his close association with Ahmad Chalabi during the George W. Bush administration's campaign to generate public support for the 2003 invasion of Iraq.[2]

In mid-July 2008, the Sunday Times of London linked Scheunemann to Stephen Payne, a lobbyist covertly filmed as he offered to arrange meetings with Vice President Dick Cheney, Secretary of State Condoleezza Rice, and others, in exchange for donations to the George W. Bush Presidential Library. Payne said Scheunemann had been "working with me on my payroll for five of the last eight years". [3]

"Before launching Orion Strategies, Mr. Scheunemann served as President of Alexandria, Virginia-based Mercury Group, Inc. where he supervised and directed all operations of the $3 million consulting and communications company."[4]

"From 1999-2000, Scheunemann served as Defense and Foreign Policy Coordinator for the John McCain/"McCain 2000" presidential campaign where he appeared throughout the U.S. as a campaign spokesperson on national security issues. During 1996, Mr. Scheunemann was a senior adviser to Republican Presidential Candidate Bob Dole. He served on the 1996 Republican Platform Committee and wrote major portions of the foreign policy, defense and intelligence planks."[4]

"Prior to joining the private sector, Mr. Scheunemann served as National Security Adviser to Senate Republican and Majority Leaders Bob Dole and Trent Lott from 1993-99. As a senior adviser, he developed, coordinated and implemented policy for the Majority Leader and Republican Senators on all foreign policy, arms control, national security and intelligence issues."[4]

"Mr. Scheunemann was involved in Senate deliberations concerning the use of American military power in Somalia, the Korean peninsula, Iraq, Haiti and Bosnia. He also served as coordinator for Senate Republican policy on United Nations reform, Congressional-Executive war powers, NATO enlargement, global climate change, economic sanctions, ballistic missile defense and technology transfers to China. He has traveled to over 80 countries to examine U.S. policies and programs."[4]

"From 1986-1993, Mr. Scheunemann served on the staffs of the Senate Foreign Relations Committee, the House Foreign Affairs Committee, and the House Republican Policy Committee. Mr. Scheunemann has authored articles for The Wall Street Journal, The New York Times, The Washington Post, Foreign Policy and other national publications. He has served as guest lecturer on foreign policy and security issues for the Foreign Service Institute, the National Defense University, the Defense Trade Advisory Group, the Republican National Committee's Team 100, the Institute for Foreign Policy Analysis, American University and the U.S. Information Agency. Mr. Scheunemann serves on the Board of Directors of the U.S. Committee on NATO, as a consultant to the Office of the Secretary of Defense and as Treasurer of The Project on Transitional Democracies."[4]

Wikipedia also has an article on Randy Scheunemann. This article may use content from the Wikipedia article under the terms of the GFDL.