Schneider National, Inc., often called "Schneider," is a company that provides trucking, logistics, and intermodal services. Its stock is not publicly traded.[1] In 2013, Schneider was #130 on the list of Forbes largest private companies.[2] Schneider is headquartered in Green Bay, Wisconsin and its CEO is Christopher B. Lofgren.[3]

Schneider has $3.5 billion in annual sales and directly employs over 11,000 drivers. Many of its warehouse operations are outsourced to other firms.[4] Schneider operates in the U.S., Canada, Mexico, and China.[5]

Schneider manages Walmart's two largest warehouses, one located southwest of Chicago in Elwood, Illinois and one located east of Los Angeles in Mira Loma, California. Schneider itself subcontracts warehouse operations to other firms. As part of its investigation into the temp economy, Pro Publica found that "Such layers of temp agencies have helped Walmart avoid responsibility when regulators have uncovered problems or when workers have tried to sue, accusing the company of wage or safety violations."[6]

Workers at both facilities have made allegations of rampant wage theft, retaliation, and other problems, leading to strikes, protests, and lawsuits. One California suit alone resulted in a $21 million settlement (see below). One worker at the Elwood facility showed Pro Publica a 2011 paycheck from a subcontractor, Eclipse Advantage. According to a Pro Publica investigation, "The check shows he was paid only $57.81 for 12.5 hours of work, or $4.62 an hour. Neither Eclipse, Schneider nor Walmart provided an explanation for Gutierrez’s paycheck."[6]

Workers at a warehouse and distribution facility in Mira Loma, California brought a class action lawsuit against Schneider Logisitics and Walmart. The suit alleged that workers, many of them Latino immigrants, had been paid according a piece-rate system which resulted in many being paid less than minimum wage while often working double shifts.[7] Walmart and Schneider initially argued that they were not joint employers, because the workers had been hired by two other firms, Premier Warehousing Ventures and Impact Logistics, which had been subcontracted by Schneider. However, U.S. District Judge Christina Snyder ruled that the companies could be held liable. Schneider reached an agreement in May 2014 to settle the case for $21 million.[4]

On September 15, 2012, workers at a Schneider Logistics-run facility in Elwood, Illinois walked out on strike to protest working conditions. The Elwood facility is Walmart's largest warehouse in the U.S.[8] The strike was part of a multi-year effort on the part of Warehouse Workers for Justice, which also included lawsuits and rallies. Workers' complaints included low wages, failure to pay overtime, sexual harassment and racial discrimination, and extreme temperatures in the warehouse.[9] The strike ended on October 8, after workers won concessions including full back pay from RoadLink, the subcontractor that hired workers for the facility.[10]

A later complaint to the National Labor Relations Board by nine workers at the warehouse claimed that they had been fired in retaliation for labor activism. Schneider and two subcontractors, RoadLink and Skyward, reached a settlement in December 2013, agreeing to pay $52,381 in back pay and to notify workers of their legal rights. The workers were not reinstated.[11]

As of September 2014, the U.S. Department of Labor Occupational Safety and Health Administration (OSHA) had found safety violations during at least two separate inspections of Schneider warehouses. In August 2010, 13 instances of serious violations of materials handling regulations exposed 100 people to safety risks at the Elwood facility.[12] In November 2011, a violation related to a forklift and the proper completion of injury report forms was reported at a Schneider warehouse in Georgia.[13]

Federal and state laws (Worker Adjustment and Retraining Notification Act, or WARN Act) require companies to give advance notice of plant closings and mass layoffs to workers. The actual number of layoffs may not always match the information provided.

Reps. Bill Schuster and Nick Rahall are the ranking members of the U.S. House Transportation and Infrastructure committee, and Rep. Reid Ribble serves on the committee.[21]

Schneider Gets Its Bill Passed Due to Political Relationships

According to the Arkansas Trucking Report, Schneider CEO Christopher Lofgren joined with a coalition of other trucking company representatives to form The Trucking Alliance, which successfully lobbied Rep. Ribble to introduce specific legislative changes in a 2013 transportation bill, including mandating onboard electronic logging devices in commercial trucks.

"'Our strategy was simple, said Lane Kidd, president of the Arkansas Trucking Association who also served as senior manager for the alliance. 'Nobody knew the Alliance, but congressmen certainly knew the names of the companies in the Alliance and the number of people they employed in their districts.'
"And those relationships resulted in U.S. Senator Mark Pryor (D-Ark.) introducing the two bills in the Senate; Congressmen Rick Crawfod (R-Ark.) and Reid Ribble (R-Wis.) did the same in the House of Representatives."[22]

Ribble has received $5,000 in contributions from Schneider's PAC and over $28,000 from Lofgren and Schneider employees.[23]

Schneider CEO Christopher Lofgren made at least $52,700 in political contributions from 2002 and September 2014, according to the National Institute for Money in State Politics.[24] Recipients of contributions from Lofgren include:

Schneider National received at least $1.3 million in subsidies between 2005 and 2013, according to the Corporate Subsidy Tracker database compiled by Good Jobs First.[26] The subsidies included: 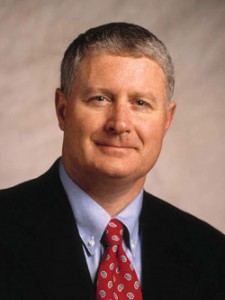 Schneider's CEO since 2002 has been Christopher B. Lofgren, who had previously served as the company's CIO and COO. Under Lofgren, Schneider has expanded its operations into China.[29]

Logren was previously employed at Symantec Corporation and Motorola, Inc. He is on the board of directors of the U.S. Chamber of Commerce, the American Transportation Research Institute, and the software company CA Technologies.[30]

As of September 2014, Lofgren's annual compensation at Schneider was not available.

On the one hand, Lofgren appears to support a small-government policy agenda, stating that "We’re concerned about the impact of increasing government activism in the transportation industry and the private sector in general." Yet Lofgren has pressed for continuing massive federal subsidies for automotive transportation through highway funding, saying of the 2010 federal stimulus bill, "We need to stop the redirection of highway trust funds to short-term agendas and make sure that these monies are spent specifically on highways—bike paths are not a transportation priority."[31]