Scott E. Talbott is senior vice president of government affairs for The Financial Services Roundtable, an organization of CEOs of the nation's largest banks, brokerages and insurers.

Scott Talbott joined the Financial Services Roundtable in 1994 after working in the tax departments of Arthur Andersen and Ernst & Young. He received his B.A. from Georgetown University, cum laude, and his J.D. from George Mason University School of Law. He attended Mason in the evening while working at the Roundtable as their C.F.O. Talbott notes that the law degree from George Mason “made it possible for me to trade my calculator for a blackberry and become a lobbyist.”[1] He is currently the Chief Lobbyist for the Financial Services Roundtable. Talbott serves as counsel to the organization and runs the Roundtable’s Political Action Committee. He manages the Roundtable's relationship with the local and national media.[2]

He is also a Public Communications consultant for Four Feet Forward[3], and organization that "work towards the betterment of nonhuman species by offering our skills in the realms of law and public communication to specific projects pursued by other animal advocacy organizations or created by this organization."[4]

Talbott and his wife LeeAnn, another native Washingtonian, live in Bethesda, Maryland, with their newborn daughter, Lauren.[5]

According to the Center for Responsive Politics, Talbott's group, the Financial Services Roundtable, has already spent $3.6 million in 2009 on federal lobbying efforts. These efforts include killing caps on executive compensation, blasting Sen. Durbin's efforts to allow bankruptcy judges to rewrite the terms of a mortgage contract, including reducing (“cram down”) the amount owed on a mortgage, attempting to tank the creation of a Federal Consumer Protection Agency, and undermining efforts to cap credit card fees. In addition to their own formidable lobbying force, the Financial Services Roundtable has two insurance industry front groups: Agents for Change and The Coalition for Insurance Modernization.

Talbott discussing executive pay provisions in the 2008 TARP "bank bailout" bill[6]: “We support the bill, but we are opposed to provisions on executive pay,” said Scott Talbott, senior vice president for government affairs at the Financial Services Roundtable, a trade group. “It is not appropriate for government to be setting the salaries of executives.”

"The pay scale for Wall Street is different for the pay scale for America," Talbott told ABC News that bank executives might quit their jobs if they were only paid $500,000 per year. He said, "I don't think the issue is a dollar amount. It's being paid what you're worth…"[7]

"The industry is restricted in setting credit terms based on the borrower's individual risk profile, so the price goes up for all borrowers," said Scott Talbott, senior vice president of the Financial Services Roundtable.[9]

Though the bill has automaker support, the potential cost could doom it, says Scott Talbott, senior vice president of government affairs for the Financial Services Roundtable. "The bill could become the victim of its own success. If everyone takes advantage of it, then the costs shoot up."

"I'm worried about the overreaction — people selling every bank short and pulling out all their deposits and hiding their money in the mattress," said Scott Talbott, a lobbyist with the Financial Services Roundtable, which represents the biggest financial firms. Although Talbott says he supports the bill's goals, he's not sure if many legislators are willing to sign on for another costly stimulus bill.

Opposing breaking up the big banks

“The industry has already adapted to the political and economic realities,” said Scott E. Talbott, the chief lobbyist for the Financial Services Roundtable, an industry group made up of the nation’s biggest banks and insurance companies. “If they are draconian, they could put the financial services industry at a distinct disadvantage in attracting and retaining top personnel. If they are just principles, they will be redundant because the industry has already moved to connect employee compensation with the long-term health of the company.”[15] 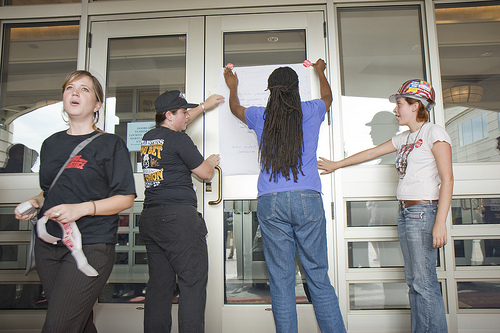 On September 24th, 2009 A demonstration was staged outside of the Financial Services Roundtable meeting, calling for real economic recovery for working people. More photos can be found at http://www.flickr.com/photos/seiu/sets/72157622447667932/ Photo © 2009 David Sachs / SEIU.