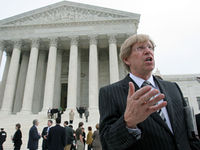 Theodore B. "Ted" Olson, is a former Assistant Attorney General to the Reagan Administration[1]and former Solicitor General for the Bush administration. He was appointed June 10, 2005, by President George W. Bush to be a Member of the Privacy and Civil Liberties Oversight Board.[2] Olson had argued a dozen cases before the supreme court prior to his appointment, including Bush v. Gore, which ended the recount in the 2000 election and gave Bush the victory.[3] Olson was listed among the "Top Contenders"[4] to replace Attorney General Alberto R. Gonzales. Most recently, Olson served as attorney for Citizens United in the Supreme Court case Citizens United v. Federal Election Commission.[5]

According to an online biography, "Mr. Olson served President Ronald Reagan as Assistant Attorney General for the Office of Legal Counsel from 1981 to 1984. Before being named to that post, he was a partner in the Los Angeles office of Gibson, Dunn & Crutcher, where he practiced constitutional, media, commercial and appellate litigation. After completing his service as Assistant Attorney General, Mr. Olson returned to Gibson, Dunn & Crutcher, in its Washington, D.C. office, engaging in the practice of constitutional and appellate law and general litigation, and served as Partner-in-Charge of that office, on the firm's Executive and Management Committees and as co-chair of the firm's Appellate and Constitutional Law Practice Group.[6]

"Mr. Olson has argued 37 cases before the Supreme Court of the United States, 14 while in private practice and 23 while serving in government, including cases involving constitutional and federal statutory questions regarding copyright, school vouchers, the internet, the 2000 census, property rights, punitive damages, telecommunications, criminal law, immigration, federal securities regulation, the Clean Air Act, antitrust, the right to a jury trial, due process, voting rights, equal protection, the ex post facto clause, the speech, press and religion clauses of the First Amendment and the constitutionality of the McCain-Feingold campaign finance reform law. Before rejoining the Justice Department in 2001, he successfully represented candidates George W. Bush and Dick Cheney in the Supreme Court Bush v. Gore cases involving the 2000 presidential election.[6]

"Mr. Olson is a Fellow of both the American College of Trial Lawyers and the American Academy of Appellate Lawyers. He has written and lectured extensively on appellate advocacy, oral advocacy in the courtroom and constitutional law."[6]

People for the American Way writes that Olson was, "One of the most prominent ultra-conservative lawyers in Washington," "came to Washington in 1981 to work in President Reagan's Justice Department and later represented the former president during the Iran-Contra scandal. Having argued the Supreme Court case of Vice President Albert Gore, Jr. v. Gov. George W. Bush that essentially decided the presidential election in his client's favor, Olson has remained a key player on the national stage.[7]

"He has served on the boards of various right-wing foundations and think tanks, including the Washington Legal Foundation, a public interest law firm with an ultra-conservative and free-market emphasis, and the Independent Women's Forum. Olson also was the head of the Washington D.C. chapter of the right-wing Federalist Society.[7]

"Olson, a former law partner of one-time Independent Counsel Kenneth Starr, assisted Paula Jones' legal team in her sexual harassment suit against President Bill Clinton. Olson also represented Whitewater figure David Hale during Senate hearings investigating the Clintons' role in the Arkansas land deal. Olson wrote scathing articles about the Clinton administration and Janet Reno, and was involved in the "Arkansas Project," an effort by the American Spectator magazine to use private investigators to uncover damaging information regarding the Clintons. The project was funded with $2 million from right-wing billionaire Richard Mellon Scaife. [7]

"Olson is known for his right-wing views on affirmative action and other civil rights issues. During his legal career he unsuccessfully defended both the Virginia Military Institute's decision to exclude women despite its state funding and the Colorado initiative that would have barred cities and towns from passing gay rights statutes. He won the case that overturned affirmative action admission policies for the University of Texas Law School."[7]

Olson's third wife was Barbara Olson, a right wing conservative TV commentator who was killed by Islamic militants in the September 11th, 2001 attack on the Pentagon. In 2002, Olson met Lady Booth, a tax attorney and native of Kentucky. The two were wed on October 21, 2006, in Napa Valley, California.[9]

Olson broadcasted his argument in a Wall Street Journal opinion article on September 7th, 2009. Olson stated that he believed the attempt by Congress to limit financial political contributions by corporations violated the First Amendment's command that Congress shall make no law abridging the freedom of speech. Olson would argue that limiting corporate contributions was "outlawing political speech based on the identity of the speaker." Olson also argued that the McCain-Feingold campaign finance law, a bipartisan bill that attempted to reform campaign finance and was signed into law by George W. Bush in 2002,[11], was unconstitutional because, he wrote, "The First Amendment does not permit the government to handicap speakers based on their wealth, or ration speech in order somehow to equalize participation in public debate." Olson also stated in the opinion piece, "Tomorrow's case is not about Citizens United. It is about the rights of all persons -- individuals, associations, corporations and unions -- to speak freely. And it is about our right to hear those voices and to judge for ourselves who has the soundest message." The supreme court would go on to vote in his favor.[12]