Thomas F. Farrell II has been president and chief executive officer of Dominion since January 2006. He was elected chairman in April 2007. He has also served as chief operating officer and executive vice president for the company.[1]

Farrell is also chairman of the board and chief executive officer of Virginia Electric and Power Company, a subsidiary of Dominion. Previously he was chairman, president and chief executive officer of Consolidated Natural Gas Company, a former Dominion subsidiary that merged with Dominion in June 2007. Farrell is also a director of Altria Group, Inc.[1]

He earned his undergraduate and law degrees from the University of Virginia, where he is a member of the Board of Visitors. He joined Dominion in 1995.[1]

In May 2007, Forbes listed Farrell as receiving $2.73 million in total compensation for the latest fiscal year. He ranked 34th on the list of CEOs in the Utilities industry, and 395th among all CEOs in the United States.[3]

On January 1, 2009, Dominion implemented a rate increase for its Virginia customers to help pay for its Wise County Plant. The rate adjustment will raise bills by $1.53 for every 1,000 kilowatt hours of electricity customers use, which translates to an increase of $1.84 per month for the average customer. The increase will subsidize $83 million in financing costs for the plant during 2009.[4] Dominion made no announcement about the rate change.[5]

Citizen action and protest against Dominion

On June 26, 2007, more than 35 people with the Southern Appalachian Mountain Stewards and Mountain Justice Summer marched in Richmond, VA, calling for Dominion to abandon its plans for a Wise County Plant in southwest Virginia. The march began at Massey Energy’s headquarters, where participants acted out a “baby shower” for newly-mined coal. With “baby coal” placed in a coffin, the march moved to Dominion Resources’ headquarters and a mock funeral was held for the coal, drawing a line between strip mining and coal-fired power plants. [6] 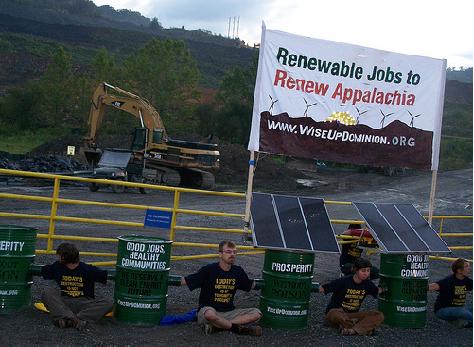 On April 15, 2008, protesters gathered in Richmond, VA as three people with Blue Ridge Earth First! blockaded the road in front of Dominion’s headquarters. The three blockading the road received summons for blocking traffic, but no arrests were made. [7]

On June 30, 2008, 20 activists with Blue Ridge Earth First! and Mountain Justice Summer blockaded the entrance to Dominion Resources' corporate headquarters to protest the company's plan for the Wise County Plant in southwest Virginia. Four protesters formed a human chain with their hands encased in containers of hardened cement and a fifth dangled by a climber's harness from the Lee Bridge footbridge. After several hours police made there way through the miles of backed up traffic to cut the activists out of the lockboxes and barrels. The climber came down on his own. Police also detained eight others standing on the sidewalks supporting the lockdown team. 13 in total were arrested.[8].

On September 15, 2008, approximately 50 protested at the construction site of the Wise County Plant. A blockade of the construction site was created when participants locked down to steel barrel drums and to the gates of the site. Two of the barrel drums had operational solar panels affixed to the top that illuminated a banner reading "Renewable Jobs to Renew Appalachia." Eleven people were arrested. [9] Later that day in San Francisco, activists with the Rainforest Action Network infiltrated Dominion CEO Thomas F. Farrell’s presentation at Bank of America’s Annual Investment Conference. Farrell’s PowerPoint presentation was replaced with a slideshow of the Wise County Plant protest. [10]