Thor Halvorssen Mendoza (b. 1976) is president and CEO of the Human Rights Foundation. He is Venezuelan. 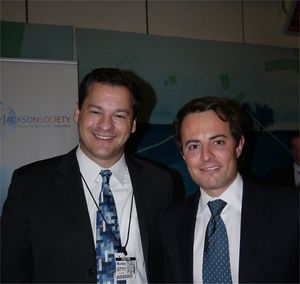 "A lifelong civil liberties advocate and film producer, Mr. Halvorssen is President of the Human Rights Foundation. Mr. Halvorssen was the first Executive Director and Chief Executive Officer of the Foundation for Individual Rights in Education (FIRE), a free speech group he headed from its founding in 1999 until he stepped down in 2004 to create HRF. Mr. Halvorssen is the founder of the Moving Picture Institute and the producer of several feature films and documentaries that focus on human freedom including Freedom's Fury (executive produced with Quentin Tarantino and Lucy Liu), Indoctrinate U, and Hammer & Tickle (2006 winner of the Zurich Film Festival). He is a contributing author to several books about freedom. Halvorssen graduated Phi Beta Kappa and magna cum laude from the University of Pennsylvania with concurrent undergraduate and graduate degrees in history."[1]

Thor Halvorssen, a human rights advocate and film producer, founded the Human Rights Foundation in the spring of 2005. Mr. Halvorssen began advocating for human rights in 1989 in London by organizing opposition to South African apartheid. After completing his secondary education in the United Kingdom, he attended the University of Pennsylvania; there he became a judicial advisor for students charged inside the college judicial system. Mr. Halvorssen's advocacy of individual rights earned him an Ivy Day Award from the university president for "protecting freedom of speech on campus." Having witnessed countless violations of freedom of speech and due process on United States college campuses, Mr. Halvorssen was instrumental in creating and developing the Foundation for Individual Rights in Education, serving as its first executive director and then CEO from its founding in 1999 until 2004. Under his decisive leadership, FIRE became the nation's pre-eminent student rights organization.