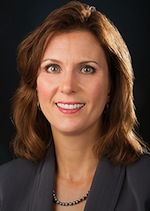 Although many SPN groups claim to be independent and non-partisan, they promote a policy agenda -- including union-busting, attacks on the tort bar, and voter suppression -- that is highly-partisan and electoral in nature. Sharp told the Wall Street Journal after Donald Trump's victory at the polls in 2016, "We feel like for such a time as this, we've built up this network. We need to really run. This is a state moment."[2]

Sharp celebrated Trump wins in traditionally blue, labor-friendly states like Wisconsin, Michigan and Indian, claiming that anti-union law changes pushed by SPN members and ALEC politicians in those states flipped them from blue to red between 2008 and 2016. She said she felt that Wisconsin and Michigan were only "thinly blue," and that the GOP has been put on better footing by the unions' slide: "When you chip away at one of the power sources that also does a lot of get-out-the-vote," she says, "I think that helps -- for sure."[2]

In 2012, a list of 2010 funders of an SPN member think tank in Texas, the Texas Public Policy Foundation (TPPF), that was disclosed to the IRS was inadvertently made public. The list of funders revealed is an important case study in how SPN's member think tanks are funded, and by whom. Koch Industries, for example, gave $159,834 directly to TPPF, in addition to $69,788.61 from the Claude R. Lambe Foundation, which is a Koch Family Foundation. SPN itself gave TPPF $49,306.90, but what's more, Tracie Sharp, SPN's executive director, was the contact person for an additional $495,000. These two grants, for $300,000 and $195,000, were listed as being received from the "State Think Tank Fund" and the "Government Transparency Fund," respectively -- two funds about which virtually nothing is known.[3][4]

SPN and its member groups are increasingly focused on attacking unions. An expose on the Bradley Foundation by the Center for Media and Democracy's (CMD's) Mary Bottari explains, "Because if you dismantle unions, you destroy a key funder of the Democratic Party and its 'army on the ground,' as Newt Gingrich once put it."[5] (CMD is the publisher of SourceWatch.org.)

Many SPN groups focus on destroying unions -- most notably the Freedom Foundation in Washington State and the Mackinac Center for Public Policy in Michigan. These two institutions provide training and leadership for the entire SPN network.

According to CMD's Bottari:

"The Wall Street Journal featured Bradley-funded State Policy Network leader Tracie Sharp in a post election 'Weekend Interview' called 'The Spoils of the Republican State Conquest.' Sharp told the paper that she had always felt that Wisconsin and Michigan were only 'thinly blue,' and that the GOP has been put on better footing by the destruction of the unions. 'When you chip away at one of the power sources that also does a lot of get-out-the-vote,' chirped Sharpe. 'I think that helps -- for sure.'[2]

"There's no doubt that with the decline in union membership here in Wisconsin, the political clout of the union bosses and their ability to automatically turn out members for Democrats has declined dramatically,' Brett Healy, president of the Bradley-funded MacIver Institute (SPN member group), told the Heritage Foundation's Daily Signal.

"'Did the labor reforms enacted in Wisconsin and neighboring Michigan help Donald Trump win those states?' asked Matt Patterson, executive director of the Center for Worker Freedom at Grover Norquist's Americans for Tax Reform (SPN member group). 'No question in my mind. Hard to fight when your bazooka's been replaced by a squirt gun.'"[5]

SPN is a web of right-wing “think tanks” and tax-exempt organizations in 50 states, Washington, D.C., Canada, and the United Kingdom. As of January 2021, SPN's membership totals 163. Today's SPN is the tip of the spear of far-right, nationally funded policy agenda in the states that undergirds extremists in the Republican Party. SPN Executive Director Tracie Sharp told the Wall Street Journal in 2017 that the revenue of the combined groups was some $80 million, but a 2019 analysis of SPN's main members IRS filings by the Center for Media and Democracy shows that the combined revenue is over $120 million.[6] Although SPN's member organizations claim to be nonpartisan and independent, the Center for Media and Democracy's in-depth investigation, "EXPOSED: The State Policy Network -- The Powerful Right-Wing Network Helping to Hijack State Politics and Government," reveals that SPN and its member think tanks are major drivers of the right-wing, American Legislative Exchange Council (ALEC)-backed corporate agenda in state houses nationwide, with deep ties to the Koch brothers and the national right-wing network of funders.[7]

In response to CMD's report, SPN Executive Director Tracie Sharp told national and statehouse reporters that SPN affiliates are "fiercely independent." Later the same week, however, The New Yorker's Jane Mayer caught Sharp in a contradiction. In her article, "Is IKEA the New Model for the Conservative Movement?," the Pulitzer-nominated reporter revealed that, in a recent meeting behind closed doors with the heads of SPN affiliates around the country, Sharp "compared the organization’s model to that of the giant global chain IKEA." She reportedly said that SPN "would provide 'the raw materials,' along with the 'services' needed to assemble the products. Rather than acting like passive customers who buy finished products, she wanted each state group to show the enterprise and creativity needed to assemble the parts in their home states. 'Pick what you need,' she said, 'and customize it for what works best for you.'" Not only that, but Sharp "also acknowledged privately to the members that the organization's often anonymous donors frequently shape the agenda. 'The grants are driven by donor intent,' she told the gathered think-tank heads. She added that, often, 'the donors have a very specific idea of what they want to happen.'"[8]

A set of coordinated fundraising proposals obtained and released by The Guardian in early December 2013 confirm many of these SPN members' intent to change state laws and policies, referring to "advancing model legislation" and "candidate briefings." These activities "arguably cross the line into lobbying," The Guardian notes.[9]

Other Ties and Background 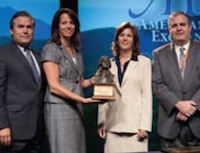 Sharp is also a trustee to the Roe Foundation of Greenville, South Carolina, the foundation endowed by South Carolina hardware store millionaire and SPN founder Thomas A. Roe, and to the Special Hope Foundation, a "family foundation supporting innovative projects to assist the causes of the physically, emotionally, and developmentally disabled," a biographical note on the SPN website states. In 1993, Sharp founded HOPE-Oregon, a Portland, Oregon-based "private volunteer effort to provide health care education services to low-income families."[1]

According to SPN, "Previously, Ms. Sharp worked with Washington State radio commentator and Republican Party leader John Carlson as director of programs at the Washington Institute for Policy Studies in Seattle."[1]