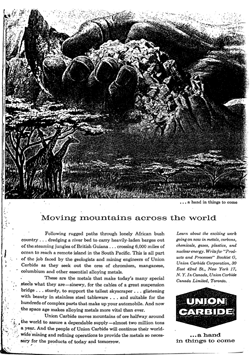 Union Carbide Corporation is a wholly owned subsidiary of the Dow Chemical Company. Originally incorporated in 1917, Union Carbide was taken over by Dow on August 4, 1999.

In December 1984 a major accident occurred at Union Carbide's Bhopal plant in India.

To this day, the company claims the accident was the result of "an act of sabotage". [1]

Union Carbide established a website, titled the Bhopal Information Center, to put its side of the story.