The Brennan Center noted in 2016 that "America is in the midst of a high-pitched and often highly partisan battle over voting rights." Voter ID laws can been seen in this context. A voter ID law requires photo identification in order to vote or receive a ballot for an election, yet many Americans have no official photo identification. Because of the obstacles and resulting costs of obtaining a qualifying ID, which varies from state to state, voter ID laws have been likened to "a modern day poll tax."[1] In this resource we detail the groups that have pushed voter ID including the American Legislative Exchange Council and statement exposing the partisan intent behind voter ID laws.

As of 2016, 34 states have passed laws which require citizens to produce identification in order to cast a conventional ballot when voting.[2] After the 2008 election of President Barack Obama, whose campaign was fueled by students and African Americans, a new wave of strict voter ID passed in Republican statehouses across the nation. Proponents of the laws contend that their purpose is to prevent voter fraud, but critics such as the American Civil Liberties Union argue that they infringe on citizens' right to vote by overly-burdening certain groups of people who are less likely to possess proper identification. According to the ACLU such groups include many typically Democratic constituencies including "low-income individuals, racial and ethnic minority voters, students, senior citizens, voters with disabilities and others who do not have a government-issued ID or the money to acquire one."[3] Obtaining proper identification can be burdensome to those who must move frequently or lack documents such as a birth certificate.

The Koch-funded American Legislative Exchange Council drafted and approved a "model" "Voter ID Act" in August of 2009. The wave of bills that followed were constructed differently by different GOP legislatures, but have a common purpose to disenfranchise constituencies that are more likely to vote democratic. ALEC has attempted to distance itself from its history with Voter ID after sustained campaigning by the online civil rights group Color of Change and others, but ALEC has done nothing to get voter ID policies repealed in the states were it became law. ALEC shut down its "Public Safety and Elections Task Force" which promulgated Voter ID in 2012 after the shooting death of unarmed teenager Trayvon Martin and outrage over the NRA's and ALEC's role in promoting "Stand Your Ground" legislation in many states. This history is reviewed in a two part special report from the Center for Media and Democracy, publishers of Sourcewatch. [4]

The partisan motivation behind the Voter ID Act comports with vision of ALEC's founder, the late Paul Weyrich, who in 1980 told a group of religious fundamentalists: "I don't want everybody to vote. Elections are not won by a majority of people, they never have been from the beginning of our country and they are not now. As a matter of fact, our leverage in the elections quite candidly goes up as the voting populace goes down."[5]

Although Charles Koch denied Koch Industries' support of the Voter ID Bill in an interview with The Washington Post, Koch Industries was on ALEC's board of directors when the act was approved in 2009.[6]

Below are quotes from Republicans exposing the partisan motivations of Voter ID.

In 2018, Wisconsin Attorney General Brad Schimel credited the implementation of Wisconsin's voter ID law with narrow Republican victories. From the Wisconsin State Journal: "Republican Attorney General Brad Schimel suggested President Donald Trump wouldn’t have won Wisconsin and GOP Sen. Ron Johnson wouldn’t have won re-election in 2016 without the state’s voter ID law. 'How many of your listeners really, honestly, are sure that Sen. Johnson was going to win re-election or President Trump was going to win Wisconsin if we didn’t have voter ID to keep Wisconsin’s elections clean and honest and have integrity?' Schimel said." [7]

On the night of Wisconsin's 2016 presidential primary, U.S. Representative Glenn Grothman (R) from Wisconsin's 6th Congressional District stated in an interview with Today's TMJ4 - a local NBC affiliate - that Wisconsin's photo ID law would help the eventual Republican Presidential nominee win Wisconsin in the November 2016 election. When confronted with the fact that Wisconsin has consistently voted for Democrats in recent presidential elections, Grothman stated that Democratic front-runner Hillary Clinton was a weak candidate, then stated "and now we have photo ID, and I think photo ID is gonna make a little bit of a difference as well."[8] Rep. Grothman is a known member of ALEC.

In May 2016 former Republican staffer Todd Allbaugh testified in Federal Court in a case regarding the constitutionality of Wisconsin's voter ID law. He described a closed meeting between State Senate Republicans, in which several legislators were "giddy" about the opportunity to suppress Democratic voter turnout.[9] The legislators named by Allbaugh were Sen. Mary Lazich, Sen. Leah Vukmir, Sen. Randy Hopper, and then-Sen. Glenn Grothman.[9] All four of the legislators named are current or former members of ALEC. Leah Vukmir served for years as an officer of ALEC and is the 2016 Chairman of ALEC. Allbaugh first brought these revelations to the public when he voiced his discontent on social media with Wisconsin Republicans who advocated for the voter ID law. In the post Allbaugh stated that "a handful of the GOP Senators were giddy about the ramifications and literally singled out the prospects of suppressing minority and college voters." 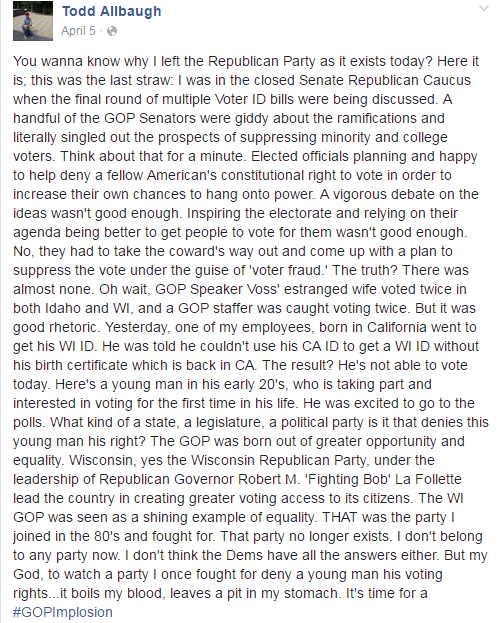 In June 2012 Pennsylvania House Majority Leader Mike Turzai told a crowd during a speech celebrating recent legislative accomplishments that Pennsylvania's voter ID law would "allow Governor Romney to win the state of Pennsylvania."[10] Rep. Turzai was a member of ALEC until he cut ties in August 2011.

In October 2013 “The Daily Show” correspondent Aasif Mandvi interviewed Don Yelton, a precinct chair of Buncombe County, North Carolina. "Yelton said that new voting restrictions imposed in North Carolina in the wake of the Supreme Court striking down a key portion of the Voting Rights Act were going to hurt democrats. 'The law is going to kick the Democrats in the butt,' he said. He added that 'if it hurts a bunch of lazy blacks that want the government to give them everything, so be it.' He also suggested that it was okay if the law hurts whites and 'lazy' college students," Reported the Wall Street Journal. Yelton resigned shortly after the Daily Show broadcast the racist comments.[11]

In an interview on a St. Louis station in April 2016, the president of the Heritage Foundation former U.S. Senator Jim DeMint bluntly stated that "in the states where they do have voter-ID laws you’ve seen, actually, elections begin to change towards more conservative candidates."[12] The Heritage Foundation was co-founded by Paul Weyrich, who also founded ALEC. The Heritage Foundation continues to advocate for the expansion of strict voter ID laws into more states.