From SourceWatch
(Redirected from Wendy's)
Jump to navigation Jump to search

The Wendy's/Arby's Group is one of the largest fast food companies in the world with over 10,200 Wendy's and Arby's outlets. Wendy's is the third largest hamburger chain in the world, behind McDonald's and Burger King. Arby's has over 3,700 outlets that specialize in roast beef sandwiches. The chain owns over 6,500 restaurants in the United States and 20 other countries. Approximately 75% of the company's chain outlets are franchised. Chairman Nelson Peltz and Vice Chairman, Peter W. May, own over 20% of the company through the investment firm Trian Partners. [1]

In the fiscal year ending in December of 2009, the company reported sales of approximately 3.58 billion dollars and had 67,500 employees.[2]

Wendy's/Arby's Group has been a corporate funder of the American Legislative Exchange Council (ALEC).[3] See ALEC Corporations for more.

Purchase of chain by Triarc

In April of 2008, the Atlanta based Triarc Companies, owned by billionaire Nelson Peltz purchased the restaurant chain. Mr. Peltz was already the owner of the Arby's chain of fast food restaurants and a significant investor in numerous other commercial food related ventures. Triarc Companies paid approximately $2.34 billion in an all-stock deal after at least two previous buyout offers were rejected by Wendy's. According to the late founder Dave Thomas' daughter, Pam Thomas Farber, the family was "devastated" by the news:

"It's a very sad day for Wendy's, and our family. We just didn't think this would be the outcome. ...(her father) would not be amused."

The deal came as Wendy's struggled with declining profits and weak sales compared with rivals McDonald's and Burger King.[5]

"an initiative that would require large and medium-sized business owners to give health benefits to their workers. ... The fast-food industry is the nation's largest employer of minimum-wage labor. ... Led by McDonald's, the industry has pioneered a workforce that earns low wages, gets little training, receives few benefits and has one of the highest turnover rates of any trade."

Other opponents of Proposition 72 included Burger King, Wendy's, Walgreen, Best Buy, Target, Sears and YUM! Brands (owner of Taco Bell, Pizza Hut and KFC), the California Chamber of Commerce and the California Restaurant Association. The state legislature had already passed a bill in 2003, signed into law by then-Governor Gray Davis, that required larger businesses to offer health care benefits. But fast-food companies, big box retail chains and their allies spent millions of dollars to rescind the law through the initiative process. In their campaign to defeat the initiative, the same groups ran television ads relying on "scare tactics, distortions and ... fundamental misrepresentation(s) of Proposition 72." [6] Proposition 72 failed. 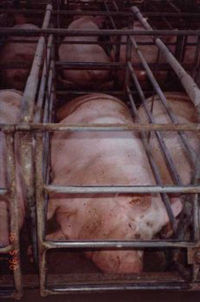 In September of 2001, People for the Ethical Treatment of Animals (PETA) announced the end of its two month long "Wicked Wendy's" campaign. The campaign followed similar, successful campaigns against other fast food chains with goals of strengthening oversight of suppliers and improving treatment of animals before and during slaughter. The campaign garnered national publicity when "Babe" star James Cromwell, was arrested during a demonstration outside a Wendy's in McLean, Va. Modest animal welfare demands included:

According to corporate image experts, like John Lister of Lister-Bulter Consulting, Wendy's made the "right move":

"Anything that reflects negatively on a brand is bad for the brand. PETA's on winning ground here. Few people will object to better treatment of animals."[7]

The group called off the campaign after the chain confirmed that it would meet the same animal welfare standards that PETA had negotiated with Burger King:

In July of 2007, following years of discussions with PETA, Wendy's announced plans to phase in the use of crate free pork and give consideration to suppliers that use "controlled-atmosphere killing," the most advanced and humane method of slaughter available. PETA continued to pressure Wendy's to improve conditions for egg laying hens.[9] 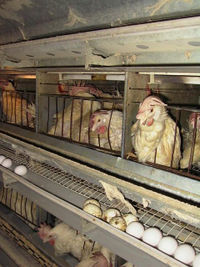 Animal rights and welfare groups have consistently urged Wendy's to discontinue purchasing from egg suppliers who confine their hens to battery cages; for the sake of both humane treatment of animals as well as health and food safety. In April of 2008, PETA's President, Ingrid Newkirk, sent a letter to Triarc’s CEO Roland Smith and Chair Nathan Peltz, addressing Wendy's animal welfare practices. Concerns included Wendy's use of egg suppliers which use hen battery cages; cages so small, that birds cannot stretch a wing nor engage in any kind of basic movement. Birds confined to battery cages wallow in their own waste and the waste of birds caged above them. Dead and dying birds are left to rot in cages with live birds. Battery hen cages are being phased out by the European Union (EU). Other fast food chains, such as Burger King, Carl's Jr. and Hardee's, have agreed to phase out the use of suppliers who use such intensive confinement methods. The grocery chains Harris Teeter and Safeway also agreed to drastically decrease the use of egg suppliers which use battery cages. Some corporations, like AOL, sell only cage free eggs in their cafeterias. [10]

In May of 2009, after lengthy discussions with the Humane Society of the United States(HSUS), Wendy's announced that it would start buying a minimum of 2% of its eggs from cage free suppliers. [11] According to Wendy's animal welfare program:

"2% of the eggs used in U.S. Company stores come from "cage-free" hens. We continue to evaluate this action based on animal science and best industry practices."

However, breeder and broiler chickens must be permitted freedom of movement throughout the entire house, "while being protected from harm". Wendy's also agreed to move away from sow gestation crates and encourage suppliers to adopt a comprehensive plan to eliminate them. Currently, 10% of the company's pork products come from hogs which are not confined to gestation crates; with a current goal of "20% over time." According to its animal welfare program, the company grants preference to suppliers with an ongoing plan to phase out crates; with progress "monitored through our routine welfare reviews."[12]

Animal welfare and food safety can be greatly improved by allowing freedom of movement and the ability to engage in natural behaviors. All thirteen of the most recently published studies found higher Salmonella rates in cage systems. One 2010 study found a 20 times greater odds of Salmonella infection in caged systems. See also compilation of 13 studies: 2006 - 2010. [13]

In April, 1997, Wendy's stockholders rejected a shareholder proposal to make the chain smoke-free.[14] Wendy's finally adopted a smoke-free policy in 2001, announcing the policy only after shareholders agreed to withdraw resolutions to make such requests.[15]

The Wendy's/Arby's group gave a total of $493,706 to federal candidates in the 2010 election cycl. election period through its political action committee, 18% to Democrats, 82% to Republicans. [16]

One of its founding members of the (no longer active) front group Employment Roundtable was John T. Schuessler, former CEO of Wendy's. The group included various labor attorneys, human resources executives and CEO's. [17] Founded in September 1999, the group's stated purpose was to:

"study, act on and impact trends and information regarding the optimal employment of the U.S. labor force for mutual benefit and the common good."

According to it's website, members met every six weeks in Manhattan.[18]

Wendy's was a member of ALEC in 2011. In June of 2011, the Center for Media and Democracy began ALEC Exposed, an extensive investigation of ALEC. This campaign garnered widespread media attention in the wake of the the killing of Treyvon Martin by Alex Zimmerman, who was initially protected by Florida's "Stand Your Ground" Law. [19]. The law originated as a piece of ALEC legislation. Under public Pressure from the Center for Media and Democracy, Color of Change, Common Cause, People for the American Way, and other allies, Wendy's made the decision not to renew their 2011 membership with ALEC. [20]