On 23 January 1968, the North Koreans seized the American spy ship, U.S.S. Pueblo. President Johnson ordered a limited reserve mobilization. Next, the communists' Tet offensive in South Vietnam in February 1968 stretched American military resources thinner. The President ordered another small mobilization. In response to the first presidential order, the ANG mobilized 9,343 personnel on 25 January 1968. Within 36 hours, approximately 95 percent of the Air Guardsmen had reported to their units. Those included eight tactical fighter groups, three tactical reconnaissance groups and three wing headquarters. The fighter units, which had been beneficiaries of additional resources under the "Combat Beef" program, were rated combat ready when called into federal service. Primarily because of equipment shortages, the reconnaissance units took about a month to prepare themselves for overseas service. The President mobilized and additional 1,333 Air Guardsmen on 13 May. ANG units mobilized in May included two tactical fighter groups and a medical evacuation unit. The former, equipped with F-86Hs, were sent to Cannon AFB, New Mexico to train Air Force pilots as forward air controllers and combat crewmen. The latter transported military patients in the continental U.S. and the Caribbean. 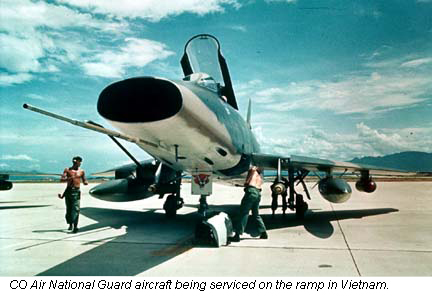 On 3 May, F-100s from the 120th Tactical Fighter Squadron (Colorado) arrived at Phan Rang Air Base. By 1 June, all of the l20th's pilots were flying combat missions. In the meantime, the 174th (Iowa), 188th (New Mexico), and the 136th (New York) had all deployed to Vietnam with their F-100s. In addition, 85 percent of the 355th Tactical Fighter Squadron -- on paper a regular Air Force unit -- were Air Guardsmen. The Air Guard units were quickly and effectively integrated into Air Force combat operations in Southeast Asia (SEA). Prior to their return home in April 1969, they flew 24,124 sortie and 38,614 combat hours. Those numbers rose to approximately 30,000 sorties and 50,000 combat hours if the predominantly Air Guard 355th was included. Two ANG fighter squadrons and their F-100Cs were dispatched to Korea in the summer of 1968 to replace the Air Force units that had been rushed there during the Pueblo crisis. The 166th (Ohio) and the 127th (Kansas) were formed into the 354th Tactical Fighter Wing. Except for the two flying squadrons, the wing consisted of individual Guardmembers and Air Force Reservists from other units. Once the Pueblo's crew was returned, the Air Guardsmen returned to the U.S. and left federal service shortly thereafter. 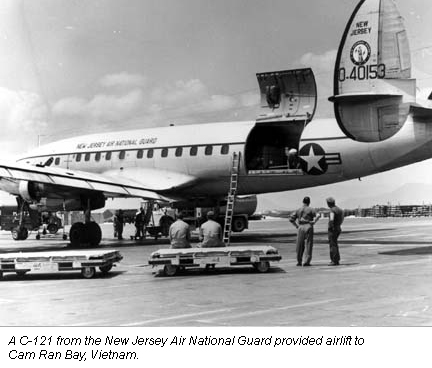 The 123rd TRW experienced a difficult tour of active duty. The wing and its four units -- the 123rd Tactical Reconnaissance Group (Kentucky), 189th Tactical Reconnaissance Group (TRG) (Arkansas), 152nd TRG (Reno), and the 123rd Reconnaissance Technical Squadron (RTS) (Arkansas) -- had not been rated combat-ready when mobilized on 26 January 1968 primarily due to equipment shortages. The l23rd's RF-101s began functioning as the primary Air Force tactical reconnaissance platforms in the continental U.S. Elements of its squadrons rotated temporary duty assignments in Japan and Korea from July 1968 until April 1969 providing photo reconnaissance support to American forces in those areas.