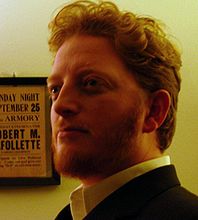 Manski was born in Pittsburgh, Pennsylvania on July 16, 1974. When he was a little over three years old his family moved to Jerusalem, Israel, where he and his sister, today a Palestinian rights advocate, spent their early childhood years. In 1982, his parents decided to return to the United States, moving to Madison, Wisconsin. Ben and his sister were strongly influenced by family traditions of political struggle, especially by the lifelong civil rights activism of his maternal grandmother and by the participation of his father’s family in the Jewish resistance movements of the 1930s and 1940s.[1]

Manksi received his J.D. from the University of Wisconsin–Madison in 2005, and a B.A. in Sociology with a focus in Rural Sociology from UW–Madison in 1999.

Professional and Activism Career: A Fusion of the Two

Ben Manski is a stalwart of democracy, and his work has taken him all across the country, and indeed, throughout the world, in the attempt to make the world a better place, a place in which people, and not corporations, decide what they want their society to resemble. Manski is an attorney who uses the trade as a way to fight the pro-democracy battle. He is the executive director of the Liberty Tree Foundation, principal attorney at Manski Law & Communications, LLC, and an associate fellow with the Institute for Policy Studies.

Manski has served as co-chair of the Green Party of the United States, national director of the Campus Greens USA, and as Midwest Director for the Ralph Nader 2000 campaign. Since the early 1990s, he has been a featured speaker on scores of campuses and at hundreds of events, from Barcelona to Caracas to Seattle, and has appeared in The New York Times, Washington Post, USA Today, Washington Times, Chicago Tribune, The Nation, The Progressive, Mother Jones, National Public Radio, Air America, CNN, ABC News, Fox News, among others.[2]

The late Howard Zinn said, “Ben Manski has intriguing and provocative ideas, which will arouse spirited discussion in any audience.”[3]

The Center for Media and Democracy's John Stauber is on the record saying, “Ben Manski is a brilliant and original analyst of how corporations have undermined America, and how we the people can organize and take it from them.”

Manski, along with Center for Media and Democracy Executive Director Lisa Graves and others, are working together through Move to Amend to create a constitutional amendent that would abolish corporate personhood. He is also fighting the good fight against the illegal deployment of the Wisconsin National Guard to Iraq and Afghanistan through the Bring Home the National Guard movement.

Manski self-describes himself as a "democrat" with a "lower d," stating that in today's day and age, to be a democrat is revolutionary in its own regard.